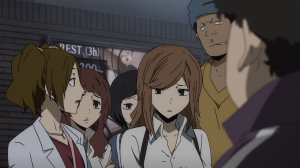 I don’t believe I’ve seen another series that had people getting kidnapped as much as Durarara!!.  This has to be one of the most important episodes of x2 Shou to date because a faction of the Dollars group decides on kidnapping Chikage’s main girl.  The Dollars are more of an organization than some gang.  They jump on chat rooms and preach their believes and on-goings.  This is one big reason why I like this series–  it’s use of social media trends.

Many of Durarara!!‘s original villains show up in this as a sort of group that goes against Ryuugamine’s intentions.  Great to see tackling a redemption style for its bad dudes–  Ryuugamine getting beaten up is one way to tie in a bunch of narrative from the first season as well as mixing in some of the new cast from this season!  Kadota’s fight with Chikage took up most of the runtime here that sets up Varona’s fight with Anri, Kadota’s crew with the other Dollars members and Shizuo’s arrival at the climax!  I enjoyed this episode a lot the blurry effect at the end was a fairly solid way of illustrating how beaten up Ryuugamine was and that Shizuo was the shining hope at finishing the mess he’s gotten himself into.