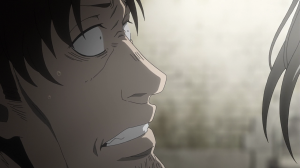 I’m still backlogging a bunch of titles that I’ve been gradually getting through [watching] and will be getting to these throughout the following weeks, but I won’t be forgetting about the new summer season.  There are a ton of series I’m looking forward to especially this one!

This is everything I expected it to be and more.  It delivered! The manga is written by Kohske and is actually the only thing she’s ever done.  Most of her other works are one-shots that act as influential pieces in the making of Gangsta.  This.  This, right here, is a prime example of where the industry should be heading.  Hajime Isayame, the creator of Shingeki no Kyojin, has only written three titles in his repertoire, but Kyojin managed to be a huge success.  The gore (the unique narrative about Titans consuming people) isn’t something that’s been done before.  In the past decade or so, we’ve had a great many artists from Japan and South Korea come up with a number of manga that have some strikingly similar stories.  Between ‘girl with magical powers saves boy’ or vice-versa, ‘the mysterious classmate,’ ‘school setting with fantasy elements’ are a few to name.  Come to think of it, there are about five series airing this summer season that follow one, if not two, or all three of these trends.  This is probably why there’s been such a high interest in the adaptation of light novels like the Monogatari series.  Don’t get me wrong, I’ve enjoyed quite a few series based on light novels, Bacanno!, Spice and Wolf and Gosick, but let’s see some more originality!  If the production studios want to adapt, there are the gems out there like Shino Torino’s, Ohana Hololholo–a josei series that depicts the life of a bisexual girl living with her former girlfriend, Michiru, and Michiru’s son, as well as, Kim Hyang-Min & Yang Kyung-II’s March Story.  Something this generation could learn from older mangakan and a few of the breakout-newer mangakan are defeated characters.  Shingeki has them, and Koshke’s Gangsta does a very good job at weaving them into the story.  The market in Japan isn’t very large so finding even a Western audience breaks the mold and Gangsta does just that.

It’s a mature, gritty story,about hitmen, prostitutes and thugs in the backdrop of “Ergastulum,” a fictional city.  The name derives from a Roman building that was used as a prison to chain and punish slaves and other dangerous people.

I couldn’t have asked for a better team behind the TV animation adaptation!  Manglobe is the studio working on the animation.  I can see why they took a year off–they needed it for how detailed the character designs and action sequences are!  There were a few times where characters in the background looked a bit off, but I think that’ll improve over time.  The last thing they did was back in 2013 with Samurai Flamenco, where many of the episodes had an abundance of wonky-drawn scenes that were cleaned up on the retail releases.  [I own that entire series on Blu-ray and it’s definitely a step up from the broadcast!]  Speaking of retail releases: Gangsta‘s Blu-ray Single volumes will contain English subtitles.  [I’ve already pre-ordered the first volume!]  The studio is most-known for animating Samurai Champloo, Ergo Proxy and Deadman Wonderland.  It’s a shame they did all these fan-service series between 2011 and 2013 because they fell out of the industry a bit for me.  The more adult-like designs is really where they work their magic–Ergo Proxy, Samurai Champloo, Michiko e Hatchin, and now this.  It’s been a long time coming, but this studio is back and better than ever!  A number of the key animators that worked on Michiko e Hatchin worked on this series.

The mannerisms of the characters are solid–especially with Nicolas Brown’s sign language.  So much authenticity!  All wonderfully acted, while having a surprising performance out of Kenjiro Tsuda (voicing Nicolas Brown).  The scene where he is kicking the car was breathtaking!  There aren’t a lot of anime series that touch on disabilities, and deaf characters are rarely used.  The only character that I can recall that was deaf was Houichi Koisumi of Dansai Bunri no Crime Edge.  Where Nicolas lacks in hearing, he more than makes up for in  sight and lipreading, which is a fantastic way to balance out his partner.  Worwick Arcangello has this outgoing flirtatious behavior and most of his scenes are downright cool.  His chemistry with Alex Benedetto is really solid!

The pacing is very slow and benefits greatly with Ergo Proxy‘s director, Shukou Murase, behind it, plus Ristorante Paradiso‘s script writer, Shinichi Inotsume, on board!  I remember that show being very slow and took its time each episode to flesh out Nicoletta’s relationships with the Casetta dell’Orso staff.

Tsutchie’s smooth hip-hop sounds for the anime’s soundtrack illustrates how grim Gangsta will be.  Aside from this, the only other soundtracks he’s written and produced were from Samurai Champloo and Cowboy Bebop.

This first episode really sets the stage well.  There are factions within the city and this first episode is a primer in establishing the corrupt atmosphere wonderfully.  Captain Chad of the local police working with Worwick and Nicolas behind his bosses to take down Barry Abott’s drug-dealing gang provides a very strong beginning that hooks you in!

This may be the best opening to air this season.  Not every series has aired, so only time will tell–but this rocked!  The animation, the music, the color paint effects, everything came off so smoothly!  Very upbeat sound by Stereo Dive, the vocals are edgy providing justice to this show’s dark content.  Stereo Dive Foundation is a sound-making project by producer and guitarist, R・O・N, the same creator of OLDCODEX, as well as scads of other musicians.  Their first animation single was “Daisy” for 2013’s Kyoukai no Kanata.  If Namie Amuro did a song with Jason Derulo it would sound a little bit like this.  Really colorful!

ED: “Yoru no Kuni” (夜の国; Country of the Night) by Annabel with Stereo Drive Foundation

Really, really awesome.  Annabel’s voice captures the tough life Worwick and Nicolas have lead, and the instrumentals by Stereo Drive Foundation give off what the opening sequence has–a rough and edgy atmosphere.  The visuals don’t have much movement but I feel that is its strong point.  It’s all about redemption for these two men and it’s great to see that it reflects their lives in a sort of dismal way.  The opening sequence’s pacing is a nice contrast to the driving music; this ending is also really colorful!