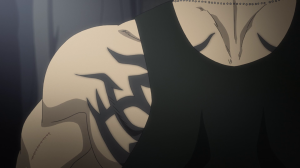 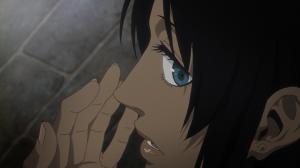 A-1 Pictures, MADHOUSE, MAPPA, BONES–any one of these studios could have made this series really pretty. Taking a year break benefits this show in numerous ways.  It takes a while getting used to their style and MANGLOBE pulled in a few new talented animators for this show.  From what I can tell in this episode there are a few scenes that has blocky designs and the buildings aren’t very detailed when the action hits the screen.  They’ve got a ways to go in growing as animators but as a whole for GANGSTA it pays off.  It’s good to see them working alongside key animators from Production I.G. and Nakamura Production because these new artists will be able to get inspiration from them.  A washed out look on the characters, dismal and dark backgrounds portrays Ergastulum in the best way possible.

This episode dives into Worwick’s other job–a gigolo.  The dynamic between the main cast is awesome–Nicholas is driven by killing and nothing else.  His fight with the dogtag last episode was a large indication of this.  As well as his tribal tattoo that Alex notices early on in this episode.  He’s a warrior with a very grim past that’s connected to Worwick’s family.  I’ve been reading the manga so I will avoid any future spoilers that the anime hasn’t covered yet.

Speaking of the manga what is interesting is how this adaptation has changed the placement of scenes.  Big Mama’s introduction ends up before Nicholas’ entanglement with Doctor Theo and the dogtag as well as a few other scenes.  I’m not sure why they did this because the show’s writer Shinichi Inotsume didn’t leave anything out of this.  Alex is slowly learning about Nicholas’ habits but this episode jumps into her relationship with Worwick and his lifestyle.  I like how understanding he is–taking Alex under his wing by giving her a job as Handymen’s secretary.  He really understands how much Alex had suffered by Barry and I’m glad the story hasn’t neglected how important the napkin is to her.  The trio’s close relationship is nicely woven into   Ergastulum–  there’s a lot of respect between the Handymen and Daniel Monroe, head of the Monroe family syndicate.  We’ve never seen Nicholas be so kind to anyone until now–his conversation with Monroe left quite the impact considering how amazing Kenjiro Tsuda is at pulling off a deaf character!

Tsutchie’s soundtrack came off wonderfully in this episode we’re finally hearing some main themes come across in the story!