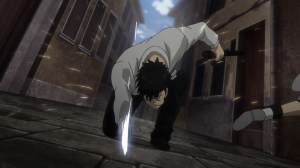 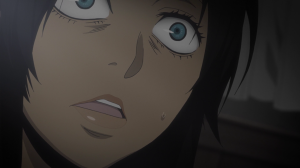 Directed by  in-between animator Kaori Suzuki.  Must have gotten a promotion in the past few years because that’s all Kaori had ever been commissioned for until this episode of GANGSTA.  Most notably known for working on Matoko Shinkai’s Hoshi wo Ou Kokomo.  This was by far the best episode of GANGSTA to date.  The music pulled together the Nicholas and Doug fight nicely. The overhead shot of the twilight duel was animated by none other than Shinya Takahashi.  The same key animator of Blood-C and Soredemo Machi wa Mawatteiru‘s opening sequences.  Animation was directed by freelance animator and one of the founders of JAniCA, Japan Animation Creators Association.  Most of his work stems from the Lupin III series and Hajime no Ippo.  The other animation director is from Studio TRIGGER’s team Kotaro Nakamori.  He’s mostly worked on 2013’s Kill la Kill and Anime Mirai 2014’s Harmonie piece that was produced by Ultra Super Pictures.  Now onto GANGSTA.

The fight was just icing on the cake as we finally get a good view of how the Twilights are treated in Ergastulum.  The three laws separates the humans of this series [called Normals] and the Twilights as Doug decides to go after Monroe from an illegally operated union.  It’s briefly shown in a televised broadcast towards the beginning.  Genius!  As loose as the narrative has been in adapting the manga the creators took a lot of attention to tell it hearty.  I’m glad to see these laws aren’t a quick plot device.  This gives a solid introduction to the Paulklee guild and its members.

Ginger is very nervous especially when handling Nicholas.  There’s an obvious gap between them–good thing this wasn’t shown off right away until her boss Gina Paulklee arrives to swiftly assess and correct the situation between the Twilights.  Doug should be more of the wildcard as given how he’s taken out Monroe’s men–a mafia leader protected by the three laws.

This is the first time we’re seeing more strength in its female characters.  GANGSTA contains a masculine quality to it–we saw that with the sex segments in the first episode and action scenes.  However this episode lifts the lid on that perspective a little and gives some fortitude to women.  Alex has been beaten physically and psychologically by Barry Abott and this episode fuels that even further.  It shows that those earlier scenes in this show are intentional in creating lasting consequences on her personality.  She may have been freed by the two hitmen but her battle to overcome her fears trapped in her mind are far from over.