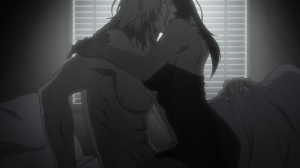 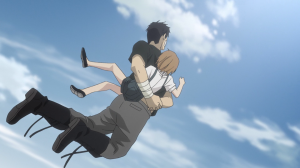 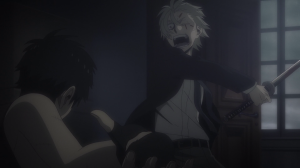 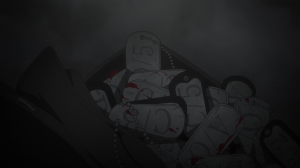 This episode strengthens and reinforces the bond the Handymen have with Alex quite a bit.  Plain and simple, they aren’t going to take advantage of her like what Barry had done.  They’re pulling her out of despair and give her a chance to start over–Nicholas did the same for Worwick when he took out his eye and murdered his family.  Before all this happened to him he taught Nicholas  how to read.  This is fundamental in how they respect one another.  Mr. Monroe is a very objective person–he’s not surprised by much of anything in the slightest.

This series is very masculine.  It’s realistic in depicting its characters’ relationships and their struggles.  It doesn’t shy away from  Worwick’s abuse from his father and Nicholas’ actions from his superiors act as the groundwork for how they want to treat Alex as theirs.  I believe this is one of the first times of many [hopefully in the future] that she takes charge.  She -worries about them especially Worwick’s pain in his eye without consideration for herself.  GANGSTA‘s director certainly took in to consideration where to place manga material in a 1-cour series.  I’ll be curious as to how they are going to end this show with the manga ongoing–will it be original?  Switching scenes around [and for the better] really adds edge to its main cast and how they interact with the side characters.  Nina’s innocence is shot down by the fact that she’s Dr. Theo’s nurse and she knows secrets behind the Twilights even about Nicholas.   Nicholas jumps from building to building with Nina in tow draws tranquility to its heavy atmosphere.  GANGSTA‘s charm lies in the gritty narrative design and being able to mix it in with heartfelt moments–most of which this episode consisted of.

At first, I wasn’t too thrilled in how these past scenes jump into between the present story but it works well when the creators are establishing the history of why Twilights stay in alleyways and curfews are popping up for certain situations.  Nicholas just like other twilights have an addiction to drugs–he relies heavily on the uppers to enhance his strength and strike fear in people wanting to mess up Ergastulum.  As it so happens the dead body cases aren’t from Doug but someone else.  1-cour airing is widely going to affect how these villains will be handled from here on out.  I applaud Kenjiro Tsuda in breathing life into Nicholas’ character.  Alex desperately wants to learn how to converse with him and it’s great to see that he at least get’s the feel for how she’s wanting to be accepted.