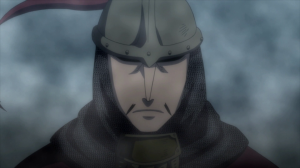 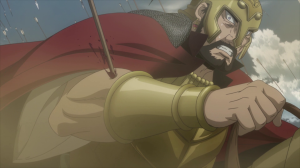 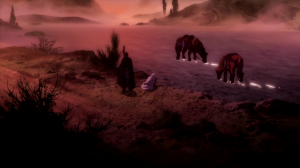 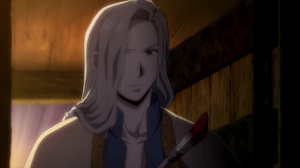 Author Yoshiki Tanaka wrote in Silvermask to be a fine antagonist.  Hiromu Arakawa’s designs help get across this dark aura surrounding him really well.  He’s a man of the cloth, and from what we’ve seen of him, lives only for revenge.  I was a bit worried about Kaji Yuuki because of his repertoire in playing supporting roles.  Many times its feminine male characters and keeping that in mind Iwasn’t sure about how he’d handle portraying the villain of this series.  Given the only scenes Silvermask is shown we see him as a man filled with rage.  Yuuki certainly pulls this off.  Though I am curious about his calmer scenes later on, hopefully all his energy in this episode doesn’t flatten out his not depiction of him.  The most impressive performance, however, has got to be from Kaneto Shiozawa (Narsus)!

The build-up to his introduction and Vahriz defeat was spectacularly moving. Previously, the Pars Army had been crushed by the Lusitanians and Kharlan’s betrayal witnessed by Prince Arslan fuels Silvermasks actions tremendously. Vahriz, as killed warrior and seeing him kill numerous Lusitania soldiers only to be killed in a single hit by Silvermask was expected but still allows for this to be a strong Persian story.

After all the fighting these past two episodes this one lands an ending with a new appearance by Daryun’s long-time friend Lord Narsus of Daylam and Elam.  Daryun’s conversation with Arslan about Narsus being a strategist unparalleled in this world makes me wonder if he will be the one to tell the story or if it will be Arslan’s own actions.  Sometimes this can pose an issue in the narrative because it can allow for Arslan to lack in development while the others around him move and talk for him.  Narsus looks a lot like Arslan and makes me wonder if he’s his actual father.  Even Andragoras holds him in high esteem and furthers this possible theory!

Lusitania is viewed as this religious country with their views about God: they use it here as a shield.  This episode illustrates this point nicely where two soldiers are talking and reflect on the atrocities they’ve committed in the name of Yaldaboath for the sake of gaining more land in Pars.

This and GANGSTA are two series more inclined to try and sell its source material and act as a good teaser for them.  It’s been recently announced that a season 2 is in the works for 2016–this is great because we are just touching the surface on this show with episode 3!  A full cour (25 episodes) wasn’t going to be enough to adapt Arakawa’s manga.  The animation in Arslan hasn’t been consistent and yet it still manages to envelope a captivating story about a Prince taking back his kingdom and the people risking their lives in order to support his cause.