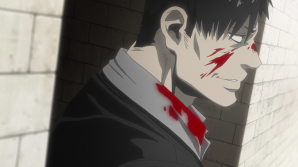 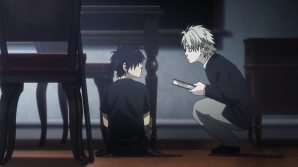 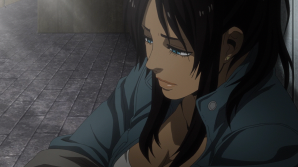 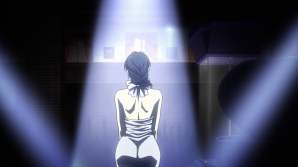 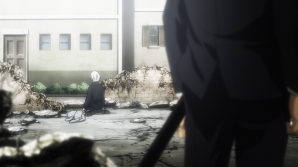 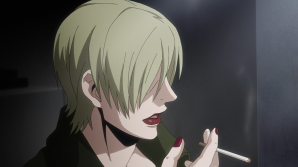 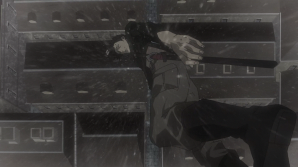 *First two images are from the Blu-ray release.

If it wasn’t for that ending I would have rated this higher.  Throughout the course of this series animation production was mediocre at best with a tremendous amount of scenes being half-finished or poorly animated.  The voice acting is top notch as we’ve got Junichi Sawabe once again voicing a womanizing character just as he did with Space Dandy last year. Plus the performance by Kenjiro Tsuda was petrifying.  I loved how director Shuko Murase handled his dialogue scenes as well as his inner monologue.

There’s a lot to enjoy from this anime a gritty story about crooked cops, prostitutes, mature character designs and a killer soundtrack by Tsutchie.  I really want to see the band compose a score for a horror series someday.  That’d be unique.

As for the story one of the issues I have is character development.  I wish they could have fleshed out the rest of the cast as our attention is more focused on the Handymen rather than the four mafia groups as a whole.  This brought about a huge problem for the so-called ending.  Side-characters.  They were the primary focus for about three episodes between introducing the Esminets and Paula’s group.  Perhaps that year off for MANGLOBE hurt them in the end after all.  This series’ animation was all over the place, it’s thick and mature, which I typically enjoy but due to the series sudden finale and second rate key animation it isn’t a series that’s lasting in my book.  As far as the Blu-ray releases go however, it’s raising the bar much higher for me, I’m curious how they will look if the company ever gets around to releasing them in single sets or one boxset.

As far as MANGLOBE goes, GANGSTA was their last mark on Japanese animation and it’s a a bit unsettiling.  They were a fantastic studio that made strives in delivering original works.  One of my favorite studios for that matter.  If anything is learned by this show it’s that studios need to give more heart to their work.  Being risky and ambitious can only go so far, sometimes to make cash for your employees you’ve got to put the talent where you are guaranteed it’ll work.  Also make an anime that is going to be a money-maker.  Light novels are always a good place to make anime works from.  As much as I hate to say that but these studios do have to cater to the mass otaku every once in a while.  Look at BONES and One Punch Man for example.  They run on a very tight very low budget with high performance by their animators each episode resulting in high reward.  Someone’s doing something right with that series.