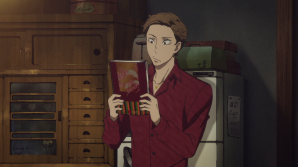 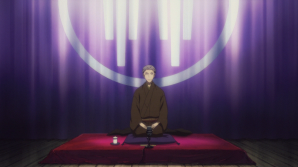 Anime isn’t what it used to be.  Stories about real people.  Solid characterization and most importantly animation that translates well into a strong story.  Josei is a genre that is somewhat of a lost breed in the anime industry.  The 90’s was a decade that flourished with astonishing josei anime from MADHOUSE’s Pet Shop of Horrors to Versailles no Bara.  The 2000’s gave us the acclaimed drama NANA, romance comedy Nodame Cantabile and the inspirational sports karuta-based Chihayafuru.  Josei is without a doubt my favorite genre.  Without all the moe and unnecessary fanservice we get to see shows focusing on adulthood from parental challenges, relationships and achieving your dreams as you grow older.  The rewards are great because there’s fantastic direction and some top notch characterization!  The last few years we haven’t had a memorable josei series aside from a few Expo shorts and OVAs (Original Video Animations).

Enter Showa Genroku Rakugo Shinju a historical josei series based on the manga by Haruko Kumota.  This is the first manga that she is branching out with and doing a story that doesn’t heavily feature yaoi (boys love) connotations. Her art is amazing and her work on this showa time period is fascinating.

The Showa era is the time period during the reign of the Japanese Emperor Hirohito from Dececmber 25th, 1926 through January 7th, 1989.  It was the longest reign of any emperor previously and it was a time where Japan was moving toward a restructuring of its country.  Political totalitarianism and facism became the backbone in Japan’s invasion of China in 1937.

A lot of series use the showa period as a backdrop.  The decades after 1945 are usually overlooked but the few that have tackled this time frame have done exceptionally strong.  Showa Monogatari set in 1964 and follows the Yamazaki family around the time of the Tokyo Summer Olympics.  It’s a good dramatic slice-of-life series if you are looking for a showa period to get into.  Moving back to Showa Rakugo the narrative is the second time, Joshiraku being the first, that I know of, that tackles rakugo.  Rakugo is a comedic monologue form of entertainment. The structure is laid out in three parts–the makura (preliminary comments), honmon (main story) and the ochi (the punchline).  The makura was the most important aspect of rakugo storytellers during the Edo period as to aid the audience in two-ways.  Draw them into the mystery of the stories and to ensure the audience would understand the jokes throughout the stories.  In anime format the makura is correlated to information drops at the beginning of the story.  For Showa Rakugo the show doesn’t highlight this first part as much and with good reason.  I believe it would distract the viewer and make them bored of the story on screen. There’s the difference between good rakugo and bad.  This first episode does an amazing job with this by contrasting Yotarou and Yakumo’s relationship and their own rakugo.

Showa Rakugo should have been the other series to air alongside Boku Machi on Noitamina’s timeslot.  One is seinen and the other is josei–what a better way to introduce these two genres to new and old viewers than run them side-by-side.  This was the only premiere to have 47-minutes of storytelling and omit an opening and ending sequence all together.  Remember the two OVA’s that came out last year?  This is a re-telling of it.  More in-depth and combines the two episodes together.  Watching this I felt as though I was seeing a feature length film!  The splendid mood and its setting was resembles the strength Mushishi carries on screen!   I really like how there’s no definite year that this show is set around.  We just get an idea based on the setting and the dialogue.  It’s definitely post-war era and judging by the look of the cars we are probably seeing this premiere from the 1970s.

The introduction is paced nicely.  The young ex-prisoner knows his dream of becoming the apprentice of Rakugo master Yuurakutei Yakumo so he stalks him.  He’s carefree and reminds Yakumo of an old friend that once mastered Rakugo theater. The seiyuu involved reminds me that there still is hope for powerful voice acting with anime actors.  Boku Machi also has talented actors!  We sure are lucky this Winter season!  I bet Akira Ishida trained for a few months to nail down that Rakugo performance!

Yotarou is very energetic and we see that from the very beginning of this episode as he’s causing Yakumo’s driver Matsuda grief. He’s been in prisoner for awhile and after a visit with Yakumo decides he’s going to change his ways.  He changes his whole outlook even down to his appearance!  Nice way to build up the mystery surrounding Yakumo’s rakugo as Yotorou describes his performances as “scary”.  Konatsu’s rakugo provides a strong primer into the entertainment this show will dive into.  This show does what many anime this season are incapable of doing–balancing the structure of “showing without telling”. Too many premieres this season have beaten a terminology backstory to death especially with Divine Gate‘s horribly laid out first episode.

Showa Rakugo introduces us to Yotarou’s former crime boss and in an odd-twist he represents the viewer’s perspective of being brand new to the art of rakugo.  Such an incredible way to deliver Yotarou’s “Dekigobokoro” with sheer brilliance! Rather than showing us scenes of the thief and the homeowner describing his situation to the landlord we’re given very expressive animation from Yotarou and superb acting by Akira Ishida!  Then there’s the audience laughter that breathes a ton of life to this entire scene!  I felt as if I was right there with the crowd laughing at all the jokes!

The best out of all of this has got to be how its directed.  Shinichi Omata (also known as Mamoru Hatakeyama at Studio DEEN) has his background in a few ecchi series and a select amount of SHAFT produced anime.  Omata’s photographic style is defined by his biggest influence–the director of Bakemonogatari Tatsuya Oishi.  He was working at SHAFT studios in 2011 and 2012 on the hit Monogatari series and it wasn’t until 2012 he received a promotion under Studio DEEN that he would become the director of Sankarea. He’s got a fair amount of experience in key animation and episode direction so seeing as how spectacular Showa Rakugo‘s first episode was I am definitely going to be keeping an eye on this director’s future works!

Showa Rakugo is patient in its delivery but the reward by the end is amazing.  I’m glad to see we’re getting a bit of background about Yakumo’s relationship with the deceased Sukeroku through Yotarou’s actions and rakugo.  Yakumo doesn’t seem to be happy about this.  I’m sure this show will delve deeper into his friendship with Yakumo and the reasons why Sukeroku’s daughter Konatsu feels bitter about him.  Overall, it’s the best premiere this season!

Judging by the preview it looks like we will be traveling to the past and seeing how Yakumo and Sukeroku got into rakugo.  I certainly hope that we get back to Yatorou and Konatsu as they’re just dynamite to watch on screen!

That song during the credits. Wow. Megumi Hayashibara on vocals and Sheena Ringo writing the song was a great collaborative effort! The soundtrack to this series rocks!

I’ve watched this twice now and I hadn’t notice this before but it was a smart move cinematically to have visuals during Yakumo’s performance.  Yotarou’s rakugo is passionate and extremely comical we didn’t need much help gathering what the story was about.  Yakumo’s on the other hand was fierce, detailed, and gripping!  The dark images that represented his story illustrated this divide in rakugo style.  A strong visual choice that paid off greatly at the end of this episode!