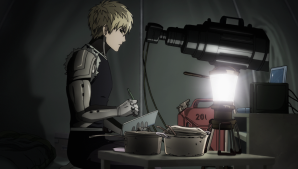 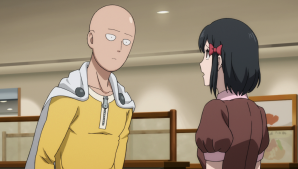 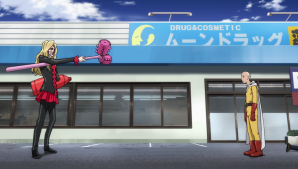 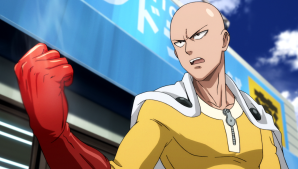 I hope that my readers are enjoying the new style with the episode production at the top of each post.  If anyone has feedback please let me know.

A 13 minute short that’s included with Blu-ray Volume 1.  Each disc following afterward will receive an extra OVA (Original Video Animation) episode penned by the original author of ONE-PUNCH MAN, ONE. It’s one of the few times an extra like this is subtitled in English!

Following right up after the events of Mosquito Girl–Genos decides to tail Saitama in hopes of discovering the secret to his power.  I like that there is a mystery behind how Saitama became strong–we as viewers get it but people within the show don’t.  It’s simple yet very effective.  He’s a normal guy that overreacts to the Alien vs. Stalker film and this builds nicely into how curios Genos is about him.  This OVA escapes the absurdity of giant monsters for the most part and gives us a taste of what normal life is day-to-day.    Loved that fries scene because it illustrates how meticulous Saitama is about his own life.

The Esthetician Man was the turnaround to show how clueless Saitama can be.  He doesn’t know after saving Genos’ life from Mosquito Girl in episode 2 that anyone would want to understand the power he’s gained until the very end.

I wish this could’ve been longer but nonetheless this was a nice treat to have on the retail discs plus with English subtitles!  Which never happens for bonus material on Japanese releases! 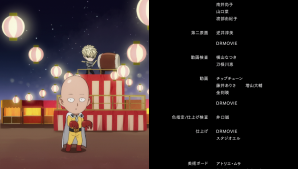 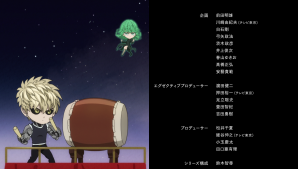 This is a song that’s far away from the peaceful ending of the TV series.  It’s heavy beats of taiko drums roots itself back to the sounds of Japan quite well.  Not really a favorite ending of mine but it does provide some funny scenes using chibi versions of the cast from ONE-PUNCH MAN; Mumen Rider giving the thumbs up, Saitama dancing and Genos banging on the taiko drums was hilarious to see.