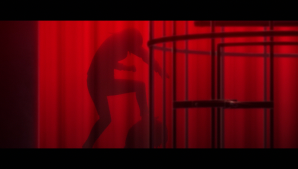 The cinematography in this series is ridiculously good.  It has a good balance between lighting and shading and long wide shots that emphasize the importance of a person’s facial expression whether the whole face is shown or not.  Loved that introduction of the teacher as he’s moving from the shadow and into the light to begin class!  There is a mix between close up shots of objects and character’s feet like this episode utilizes to build on the atmosphere throughout Boku Machi.  We also get a bunch of wide angle shots that establish the mystery surrounding Kayo’s inevitable disappearance.  The color red as we saw last time plays a significant role in depicting villainous actions–the killer’s eyes and now the amazing Kayo’s abuse scene from the perspective of Satoru was tough to watch.  Satoru’s inner thoughts remind us that he’s an adult stuck in a child’s body.  I’m glad that the creators got an actual actor to portray his 29 year old self because it’s his introspection and situational awareness that make this series so intriguing.

The sound effects play a large part in this and the scene in the very beginning where he’s reflecting on the situation at hand establishes this perfectly.  The closeup shot of his face as he’s sweating is very tense.  The cuts that play after these scenes develop a big picture that Satoru truly is in a different time.  It plays on how Kenya is suspicious of Satoru wonderfully.  I feel bad for Satoru because one of the last things he sees in 2006 is his dead mother and now he’s trying to figure out the world around him 18 years prior because of it.    It took me awhile to notice this but there are few key things from the premiere that you might miss from one viewing.  Remember the scene where Sachiko is on the phone on the park bench and there is that wide shot of her?  Right above her head is a shimmering thread which I’m sure will come into play later.  Also before Satoru experiences a Revival there is a blue butterfly moving across the screen.  This represents the idea of the butterfly effect–small causes can have large effects.

Yuki Kajiura weaves in quite the emotional slow-moving piece to pull in the idea that Satoru will finally see his mother again but in a different time.  This is the first time we are seeing him fall into his 11-year old self–the hamburgers and his power of revival are gradually making him lose sense of his present-day life.  Here is where we see shifts back and forth between him remembering small things like his friends and more importantly what he had said to Kayo the first time he was 11 years old.  This pulls you into the atmosphere of this show even more! From the very beginning scene where we see Satoru as a kid for the first time from episode 1 the creators did something smart in differentiating between past and present. The widescreen.

I believe the intentions of this episode are to shape how Satoru will change the future (his present day 2006) and hopefully save his mother.  His friends capitalize on this in a big way in that in order to save Kayo he has to make friends and others to realize kids are disappearing.  Love how Dragon Quest and Final Fantasy are mentioned it builds more depth to the pop culture of 1988.  Hiro and Kazu and Osamu are typical kids, they play videogames and I like how authentic their entire conversation is when it shifts to Kayo Hinazuki.  From his adult standpoint he has to save her.  From his friends’ point of view is the quick notion that Satoru has strong feelings for her.  Love how this entire idea acts as an obstacle for him in figuring out exactly how to save her and in how he thinks clearly as a 29-year old.  Fantastic script during that!  The bruises on Kayo reflect reality and the harsh life she has and Satoru’s desire to be a part of hers and make it the timeline in 2006 a better one.

It’s still great to see that Jun Shiratori is viewed as the murderer.  As little as we’ve seen of him I think Satoru is similar to him–they are both trying to fit into their society as normal people.  The first episode indicates Satoru doesn’t clearly fit in because he can’t seem to handle Airi’s affections and this episode finally shifts the focus of a love theme with Kayo in the picture.  Especially when Kayo says the same thing Airi said in the last episode about when you keep wanting to believe in something over and over how it can ultimately in the end shape your reality.  These words are quite true to Satoru’s revival ability and his desire to write a successful manga.

Kenya’s relationship with Satoru is interesting it’s more mature than any of the other students in the class.  There’s a lot of observation on Kenya’s part and it definitely keeps Satoru on his toes because by the end of this episode he’s acting as if nothing will happen to Kayo in front of his friends.  In the words of Kayo and Airi, keep believing that it is a crush, and her death may actually be avoided.  This entire idea spells out the ending in a touching way–Satoru says exactly what he’s feeling about Kayo and it’s great to see his resolve finally take form!

This was my favorite song from the ‘Sol-Fa’ album!  I’m glad to see they are re-styling it! It’s a nice homage to this series central themes!  This song rocks and its lyrics captures Boku Machi‘s time travel motif perfectly!  The visuals give a good look at school life when Satoru was a kid and it’s smart Tomohiko Ito decided to not show this until the second episode until the point in the actual story that he’s stuck inside 1988!  The transition cuts are quick and there is a lot of foreshadowing going on.  Especially the water rushing sequence as the instrumentals on the guitar get quicker and going to the chorus!  Love that part where Satoru is colored in all black and the timeline is swirling around him as he’s shapeshifting between 29 and 11 years old!  You can also see a potential spoiler if you pause the video at just the right time!  Awesome opening!  I like the film reel at the beginning with the two Satoru’s viewing their life as an entertainment form! The entire sequence translates into the story amazingly well!

ED: “Sore wa Chiisa na Hikari no yō na” (それは小さな光のような; That was like a small light) by Sayuri 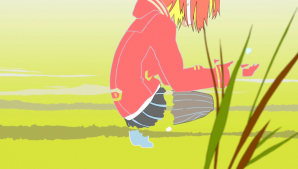 Sayuri did incredible work on Rampo Kitan: Game of Laplace’s ending ‘Mikazuki’.  This ending is tons better than that one.  Sayuri’s voice is very emotional for this song!  Everything just comes together in this!  Hands down one of the best openings of the season!  Thanks to the amazing art style by Masashi Ishihama, one of my favorite animators and the lead director on the anime adaptation of 2012’s Shinsekai Yori!  His style is influenced by a variety of talented animators from Masami Obari to SHAFT’s Akiyuki Shinbo which is why we see some pretty amazing closeups of Kayo and other female characters throughout this ending!  The color palette is to the extreme in this!  It’s otherworldly and has a strong mystical vibe to it!  I really love how his animation is erratic–Kayo hopping to the down beats of the music track in a small detail that is incredible!  Wild movement from female silhouettes flying, lying down, closeup shots of a mouth moving and my favorite part is the blinds covering the girl as she quickly turns around and points!  Remember how I mentioned the string from the first episode above Sachiko? You can find that image here.  It shows up throughout this entire ending sequence!  Between binding the girl that’s lying down in two scenes and the string actually getting cut with scissors!  Satoru’s revival ability was nicely touched up as we see him standing on top of what looks like a train car being protected by his ability!  Those aqua flames look very cool!  Awesome work on this ending!

I don’t usually post additional screenshots but that ending using the string idea was fantastic work on Ishihama’s part! 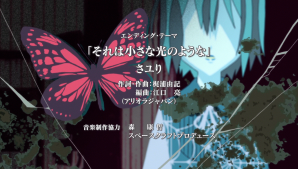