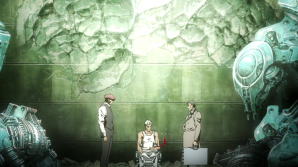 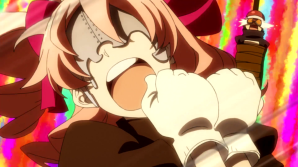 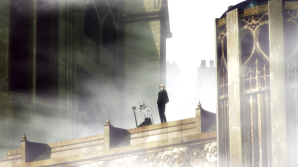 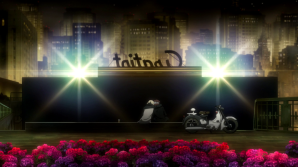 Abrhams still in Hellsalem’s Lot helps Klaus in protecting Dog Hummer.  A pretty boy that’s reminiscent of Vash the Stampede from TRIGUN an earlier work (1995) of Yasuhiro NIGHTOW’s. Since Kekkai Sensen premiered every episode has been a sensory experience–between stunning visuals, a killer soundtrack and the vast amount of talented seiyuu taking part in this BONES animation production.  Add to this list Miyano Mamoru (the voice of Dog Hummer and Steins;Gate‘s Rintarou Okabe!)  and Keiji Fujiwara (the voice of Deldro Brody and Karas‘ Nue).  The fact they share the same character builds on the foundation of what this episode is really about.  A crazy girl in love with two men and how far she goes with her obsession with the two of them.

Grinding up Deldro Brody and injecting him inside of Dog Hummer re-establishes just how creatively wild Kekkai Sensen can shape into!  Koorogi Satomi was a perfect choice for Aligura–a risky and well versatile seiyu with a lot of range between deep low voice acting to extremely high-pitched voice work!  Aligura was the spotlight of this entire episode because she can barely contain her lunacy in that she’s willing to destroy an entire city to be with Brody & Hammer!

This episode dives even further into anime original material as we learn more about White’s brother. I really like how this show is jumping between original manga material with Femt and filling it up with brand new content just for the anime!  This was the first time seeing Femt meeting White’s brother leaves a lot to guess as to how this show will end and what role Femt will play throughout the rest of this.  Mystery surrounding this series possible villains is a good way for this show to highlight it’s minor cast and build up an even large supernatural fictional New York setting!

Klaus’ role in this was interesting because he ends up stealing Deldro’s composite from the crash site–Aligura was quite anxious to get it back.  Makes me wonder if she is an Elder 13.  In any case, it’s implied strongly that she is by the end of this episode.

As for the rest of this episode it’s mostly anime original content between White and Leonardo’s budding romance–can’t believe the film they are watching is a goofy spoof of the American film “Twins”!  Haha!  Fantastic!  It’s episodes like this one that remind me that anime with source material can work together nicely with deviations using original content.  Aligura capturing Leonardo and asking him all sorts of questions about romance and if he has a girl that he cares about built up Leonardo to ask White out on a date wonderfully.  He’s become even more courageous in taking her out of her hospital bed to see a film and it pays off! Amazing ending!

I’d like to see more of Aligura she was hilarious in this episode!