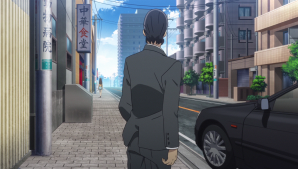 This show doesn’t hold back one bit!  With Hinazuki presumably gone there are a few hints at what possibly could have happened to her and Satoru had no way of changing it from this timeline.  Given how Kayo’s mom had thrown away her gloves this series is pointing the finger at her but another idea is that the parents could have stumbled upon her body in the shed seeing as how the guy is panicking on what they should do with the body that’s seen lying on the floor of their house.

Once again, Boku Machi‘s composer Yuki Kaijura nails the soundtrack!  I absolutely love the scene where Satoru discovers the mittens in the trashbag that Kayo’s mom had thrown out.  Satoru having lost hope that he could even save Kayo has erased his mind completely and this is when his revival ability gives him a chance to go back to 2006.  I’m glad the creators didn’t choose to cliffhanger that moment.  Most of this episode establishes the fact that Satoru could save her again if he can go back again.  We also get a good idea of how much influence the killer has in society.  He’s a business man of sorts and it’s interesting to see how close how far he’s willing to go to rid himself of Satoru let alone anyone that has contact with him.  The painting of the last supper emphasizes this fact–by removing Airi from the situation.  The string shows back up again this episode to clarify two points–the killer is in fact the man speaking with manager Takahashi and secondly, that she’s the next target.  Her strength to protect Satoru is reminiscent of how Satoru was protecting Kayo from bullying.  Being that this is the long awaited return to his present timeline of 2006 I really like how the direction of this is similar to the first episode.  Presently, Satoru is on the run from police and is being kept hidden by his friends while he investigates.

Really neat how some of the camera shots followed the same technique that the first episode did. Sachiko’s investigation into Jun Shiratori (Yuuki) and now Satoru discovering more abduction cases.  They even used the same music!

As this episode progresses it’s cool to see the switch from letterbox format to full frame scenes.  Illustrating this idea that there’s a much bigger world out there when we are older and when we’re young we have a smaller perspective of the world and the people around us.

While the direction of this episode was strong there was Airi’s backstory that make this the weakest episode of the series so far.  Her parents breakup due to a misunderstanding with the police.  This felt a bit far fetched. Her father could have handled the situation better than just sacrificing his pride.  It’s a pity this backstory was thrown in even in the original manga because it feels so trivial compared to the main narrative Boku Machi should be focusing on.  Kayo Hinazuki’s home life.  The time traveling aspect and the killer are just a guise to develop a solid characterization.  As bizarre as Airi’s story was it was nice to see that she has backbone and can hold her own when she chooses to believe Satoru.  The manager certainly has a thing for her and it doesn’t help that the man in the suit has a working relationship with him.  The cinematography and soundtrack worked together nicely to build up the ending of this.  While it’s a little bit different from the manga it does use visual aesthetics to create melodrama–a style this series is really good at focusing on (sometimes a little too often).