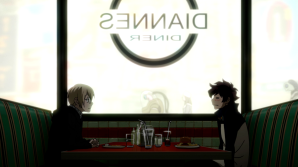 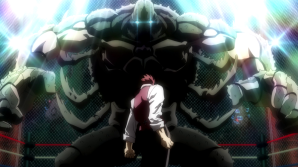 This has got to be one of the best anime original subplots I have ever seen. It’s obvious with this episode how interconnected the Black and White plot is to the main story.  Black’s friendliness is a bit off-key compared to his moments with Femt–something is off about the guy. Either he has a split personality or he’s putting on an act in front of his sister, White and Leonardo Watch.  The references don’t let up either.  I mentioned in a previous post about Empire of Corpses throwing references in just for dramatic appeal but this show uses them in the background to develop the large cast better than before!

Leonardo confides to Black the nickname given–Tortoise Knight. A reference to Teenage Mutant Ninja Turtles’ main character Leonardo. This ties together nicely with Kekkai Sensen‘s love affair for American pop culture. Then we’ve got the other section of the story taking form–Klaus.  Zapp’s feeble attempts at gaining the upperhand against Libra’s leader is downright amusing and reflects both of their personalities extremely well.  The fight between Klaus and Ozmaldo is a brilliant idea to build up how Zapp is going to finally defeat Klaus.  We also get a few tidbits of information that Ozmaldo was taken over by a dead Elder and even when Zapp didn’t know about that gives a bit more depth to Libra’s fight against the unknown wonderfully.  I like how the dead Elder that pops out of Ozmaldo’s head looks strikingly similar to that of Deldro Brody’s appearance.

After seven episodes the story isn’t set into stone yet but I have to admit this has been an entertaining and visually freakish series. I only say this because of the ridiculous actions going on in the backgrounds of Kekkai Sensen–the diner scene of this episode.  What a ride this has been!  Glad to see this series has a solid director with Rie Matsumoto at the helm to maintain this style throughout every episode!

Was that announcer the talking toaster from Space Dandy episode 13?!  I’d like to think so!