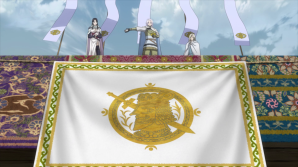 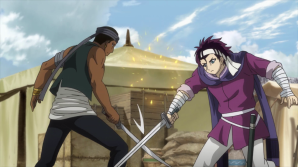 This show continues to have trouble with animation.  Especially when it comes to action scenes–Jaswant fighting Gieve had some poor facial animation and choppy hand movements.  Putting that aside, Arslan Senki‘s soundtrack is one of the best of 2015.  Incredibly moving pieces that enhance the less detailed visuals at times!  Can’t wait to hear more from Taro Iwashiro!

Narsus continues to be a driving force into the story of Arslan Senki.  He’s thwarted Kharlan’s assassination attempts towards Arslan and company, recruited many followers and last episode pincer attacked Rajendra into an inevitable alliance that would prove even this time around that the journey isn’t just about Arslan taking claim to the throne.  Gadevi sends the spy Jaswant into Rajendra’s ranks in order to turn the tables on the young prince Arslan.  It isn’t until Jaswant is recruited to the Sindhuran fortress where we see his true nature.

I believe what makes this show truly spectacular, as a whole, is how Narsus becomes so focused aiding Arslan one step ahead of everyone else.  Yet he’s unable to wrap his head around the constant bickering between Elam and Alfreed.  It just goes to show how trusted Arslan is having these soldiers and advisers follow him.  This also relates on how peaceful Arslan will be going further.

An easy success for Arslan with the battle gainst Guavin.  Deciding to release Jaswant rather than execute him goes to show his respect for human life and an impact on Jaswant it will be later.  It will make a huge impact on him because he was an orphan and loyal to his vizier–freedom is something he doesn’t know all too well of.

This episode gradually shows us Arslan’s resolve and how he will use peace to bring neighboring nations together.  The truce between Pars and Rajendra using the war elephants should prove to be interesting because it will be a test of adversity for Arslan.