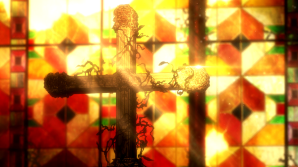 In the last episode we were treated to the White/Black subplot, anime original, and finally becoming the heart of this show.  As dramatic as this was, learning about White’s tragic past we’re now getting to a climax. This episode was different.  A fun-filled antics adventure featuring Leonardo, Zapp, and Zed on a journey for lunch.  The comedy is spot-on with this show–Zapp is his usual obnoxious self, Leonardo is the worrywart of the group and Zed puts up a front that is non-confrontational and yet still finds a way to get into Zapp’s head.

The first place that go into is a Sushi restaurant–exploring Zapp and Zed’s relationship as a semi-brotherly love.  I like how its Zapp that picks this place, ultimately backfiring on him.  Zed being perfectly fine with cannibalism highlights his reptilian appearance wonderfully!  Amidst their lunching adventure is Klaus, Steven, and Abrams aiding the city’s cops into fighting 1,000 brothers (literally).  This is one of the charm’s of Kekkai Sensen it doesn’t hold back!  Libra’s relationship with organization LOHOS is complex.  A philanthropic group of humans with super powers that had been awakened by their encounter with Beyond.  Known as Casters, referring to the same casters that created the barrier in Hellsalem’s Lot–unifying a peace treaty between humans and the otherworldly creatures known as Beyondians.  The organization is very much like Libra, keeping an interest in self-sufficiency, the natural order of things (in other words maintaining a “balance”) and a unyielding rule to sacrifice the powerful in order to protect the citizens of Hellsalem’s Lot.  This is where Black’s story converges with the cast.   A few finely detailed action sequences tied in with some strong exposition clarify how bizarrely crafted this episode is.  Strange restaurants (including an Italian restaurant that’s an obvious nod to the Sopranos) from a chef regurgitating the food they serve, chowder eating its own customers and food establishment serving brains and other body parts.  It is no wonder why Leonardo is seen freaking out (speaking in tongues) and has it out with the God of Chow.

The biggest highlight of this episode, however, is the small attention to detail.  The sign at Diane’s “Send a Salami to your boy in the army” is a reference to Katz’s Delicatessen.  A kosher style restaurant established in the lower east side of Manhattan, New York City.  During World War II the slogan was used to encourage parents to support their children that had joined the army.

I think this was a smart move to use this because everything up to this point had been absolutely bizarre and now the story has calmed down and grounded back into reality.  It isn’t until the last five minutes that the story really sets in with White’s demand of Leonardo.

Once again this show continues to amaze me!