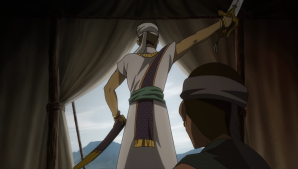 We’ve seen this many times before.  Narsus outwits Arslan’s enemies and this episode wasn’t much different on that front.  There needs to be more personal dilemma for Narsus rather than an over-powered strategist, some kind of slip-up needs to happen to build his character out better. I say this because Narsus is yet again faced with overwhelming odds and still manages to come out on top.  Rajendra has 50,000 soldiers and Gadevi has 150,000 men including drugged war-elephants.

Narsus thinks ahead by misleading Gadevi, pulling  his soldiers out of Gujarat leaving behind dummy soldiers (literally) for them to square off against.  It takes a turn for the better when Rajendra, haven’t being told of the plan, is caught by surprise when his army shows up to battle Gadevi.  It’s great to see that the plan isn’t  being told to us in plain view and even, we are surprised by how Narsus’ strategic skills are put to use in a battle with two other armies.  The tactics used in this were fantastic, however, unlike the first few episodes there wasn’t too much tension developed.

This is where  I want to mention that the director on this series is Noriyuki Abe, the general director of BLEACH.   While, BLEACH was known for information drops right before a battle, revealing a plan to an enemy even way before it occurs. This was problem for this show however Arslan Senki steers (for the most part) clear from that (for now) and designs a wonderfully written set-up to its battles especially in this episode.  Too bad the tension and the animation aren’t polished–tons of heavy action scenes detracted away from the importance of this battle.

The aftermath of the battle  with Gadevi also portrays quite a vicious image of him.  He’s ready to execute Jaswant before the Vizer steps in and this alludes to how Arlsan is viewed by the company that he keeps.  Jaswant notices the difference in how Arslan treats his loyal subjects as opposed to Gadevi.  It this entire scene that explores how immature Rajendra and Gadevi’s sibling squabble is. Making matters worse is when the old king, Karikala wakes up and isn’t too pleased to hear his sons are bickering, costing thousands of soldiers’ lives. Given the situation it makes sense, during these times, that there would be a duel before the Gods. Using Daryun for this battle is just a small piece for Arslan understanding himself, his allies, and the world accepting him as the future of Pars.