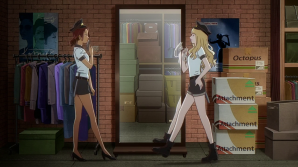 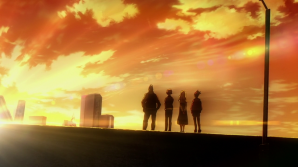 This is the kind of episode that tells us to keep watching this show. It has everything! Zombies, a music video, a dance sequence, a cameo from Space Dandy characters (QT, Honey, and the other Boobies’ waitress Candy)  and lots of other references! For the show itself, it looks incredibly amazing because it shows us how this world is much like our own when it comes to social media and how to generate attention through the net.

Having the plan with Ertegun not working out–the girls and Gus decide that a music video could be a way for them to garner attention to their music. Glad to see that the ending song finally lands a spot in this series’ story, as it’s featured in the repertoire of these girls’ songs! As far as the girls go with music I find it very neat how Roddy and Gus have impacted their lives as musicians. At first, the girls wanted to play music just for themselves and last time we got to see that they want a song that will take the world by storm. In other words, they want to become famous. Sharing the same intentions as Roddy and Gus.

This entire episode is a commentary on our way of life today–from ” in real life” relationships and how we use new media to create connections with others through the means of social networking and viral distribution. I think it would be a really cool thing to do if the creators implemented the use of a QR code in an upcoming episode that offered a download for a song they’re writing. It would certainly hit a mark.

So the group purchases a robot named IDEA to direct their DIY music video. I really like how we have this wide range of ideas for the video between Carole, Gus, and Roddy and Tuesday. Gus wants a video straight out of a Marvel film, Carole wants Michael Jackson’s Thriller, Roddy being the nerd that he is with his robots and tech equipment all through his apartment wants a music video akin to A-ha (more specifically the music video for “Take on Me”, All Tuesday wants is a cool video with a slight reference to Kevin Costner’s film “The Bodyguard”. A charm of this episode is that we have this robot combining all these referential ideas all a bit too easily. How situationally ironic this is. The entire show has been A.I. and robots doing the jobs that humans do and here we have a robot (an AI director named IDEA) relaxing watching an anime of another robot (QT from Space Dandy) relaxing. What makes this really funny is that both robots (Idea and QT) share the same voice actress. A self-proclaimed director, that drinks beer, takes a bath while drinking beer, watches anime (awesome that it turns out to be Space Dandy) and bullies Giggy (Carole’s pet robot owl). On top of that is where Roddy becomes the butt of the jokes during video production. Have to love Ertegun’s reaction at the end! As far as Ertegun goes, we have to wonder what his relationship with Roddy really is. He shoes affection towards him–he doesn’t want him falling into a trap whether it’s with Carole and Tuesday or not.  This factor works for the show’s benefits as it adds more layers to this futuristic world we’ve been presented with. Especially a world that closes its doors to human performers and showcases A.I. as the real creative geniuses behind all entertainment.

When it comes to a show like this you have to learn a little bit more about the characters to get a great story. Shinichiro Watanabe did this same thing with Space Dandy and all his other works before it. Deliver somewhat episodic content and subtlely toss in small details about the main cast. This episode, in particular, uses Gus and his connections within the industry to help these girls become stars. In order to fulfill all these unreasonable requests from director IDEA, Gus turns to his ex-wife Marie for help. Their chemistry is real. A well-grounded relationship with her ex. We don’t have to spend a few episodes seeing her character grow.  While she can receive further character development one thing is quite clear: she already has the life she wants. Without even showing us a single scene while they were married we can already tell that they had their ups and downs, but with time have gotten over it and have become closer than they ever have before.  She wants the best for him and he shares the same sentiments. I really like how the creators didn’t shove down the fact that she’s getting remarried until much later on in the episode. She’s bisexual and they establish this very naturally. It isn’t until we see the girls out shopping and getting makeovers that this is the case. She has this large change in her life, discovering who she is and finding happiness with a woman, who turns out to be hair and makeup stylist Anne.  It is out of her respect for Gus now more than ever that she chooses to help these girls with their music video. The scenes in this episode with Gus and Marie are about the best this show has so far. Very authentic especially with its production. Light jazz score and casually warm color choice, and extremely detailed bar backdrop.

As for the final music video production, it is wonderfully hilarious! Filled with lots of references from Michael Jackson’s Thriller music video to The Breakfast Club to Marvel, Money for Nothing music video, and there are a few in there I recognize but can’t quite figure out what they’re from. Carole & Tuesday is effortlessly hilarious and we can really see that with the countless ways they made the music video look amateurish. Tons of rough cuts–bad transitions and unfinished CG (not to mention their instruments are made out of cardboard) plus the framing is entirely off the wall where random people show up on camera (by accident) front and center.  They get scammed by an alcoholic robot (IDEA) into making the worst (best) ripoff music video. The video gives a good look at how songs might be produced by A.I.. We haven’t really heard much aside from Ertegun’s music but from what I gather from this video the music might be done in a similar style. If this is the case this would be a fascinating method to explore this theme.