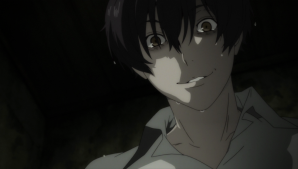 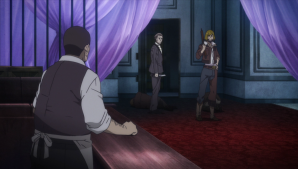 I remember how spectacular Zankyou no Terror‘s premiere was. Full of dramatic action and sequences that left me wanting so much more from a 25 minute episode run-time.  This was the case with 91 Days.  A revenge story about a young man Angelo Lagusa vows to take a revenge on the family that murdered his own. Script writer, Taku Kishimoto nailed the human relationships in this first episode wonderfully. For the first few minutes we are gently brought into the drama surrounding Angelo and his curiosity towards the Vanetti family.  He receives a picture of his younger brother claiming that the Vanetti family is in the town of Lawless.

The first ten minutes of this episode as beautifully written, incredibly drawn and the camera angles were a stylistic choice that comes off like you’re watching a high-budget 1920’s crime film.  Angelo’s brother Luce Lagusa and his friend Corteo playing with the candle are a small piece of what makes 91 Days a step up above many shows that are airing this summer season.  Shogo Kaida handles the music in this anime and I’ve got to say I’m impressed.  The use of strings during the murder scene weaves together nicely between shots of the kids looking through the crack of the closet doors witnessing the traumatic event unfolding. I also love the slow-motion effects the creators decided on using–Testa slashing at Vincente Vanetti to Luce running out of the closet to a well-lit room to save his mother.  The framing in this was spectacular!  Three Vanetti members were involved in the killing of his mother, father and brother and it creates potential in developing these characters further when (or if) we are introduced to them in some way or another.

An original story and I’m glad to see a newer studio tackle it too–they produced the previous Durararax2 Shou and Ketsu seasons so I can clearly see where their budget was being used on. It was for this. The lighting between many dark scenes of the house and landscape of the woods fit together.  I’m glad they decided on a TV route for this rather than a feature-length film.  So much story is involved!  Hopefully, they will make this longer than 1-cour (91 episodes is wishful thinking).

After the murder scene we are treated to an introduction reminiscent of the Godfather films that sets the tone and atmosphere of a 1920’s world.  Also this acts as a gradual build in time jump that begins Angelo’s revenge on the Vanetti’s. Creteo being a moonshiner was a nice choice.  It reminds us of the time this series is set in and opens up a door for Angelo to get involved with a ragtag team of bootleggers that turn out to be none other than Nero Vanetti himself, one of the men that helped with murdering the Lagusa family!