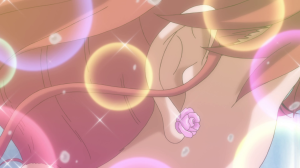 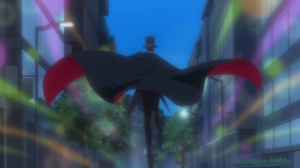 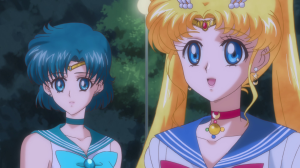 I want to point this out before I forget but the new Sailor girl introduced here is voiced by Ami Koshimizu–  might know her roles which include Kill La Kill‘s Ryuuko Matoi.  Continuing with what the first three episodes did we are introduced to another Sailor Guardian–  Kino Makoto.  Sailor Jupiter as she is known by the three girls that are in search of the legendary silver crystal are brought together here by fate.  This may not have been as good as the last but we did get another look at how Usagi is able to establish friendships.

Thought of by her peers as a tough and scary young girl, Matoko is considered a kept-to-herself person, and the event where she is rescuing Usagi from the oncoming car towards the beginning here played a large part in Usagi developing an interest in her.  This is probably one of the best parts  of the show in how silly it can be at times–  the lunchbox scene between the two of them and the arcade scenes reflect Usagi’s innate ability to bring some of the most unlikely of people–  a shrine maiden, a book-worm, a fighter and a clumsy girl together.  As great as the characters are throughout this, I wish the plot could have been more solid– too many likely parallels happen here.

However keeping in mind that this is a long running shojo series we’re talking about, Sailor Moon Crystal does well at developing a formula to follow as it knows exactly what its intentions are when the plot brings in another character.  Depict them in a beginning segment that is integral to the main character Usagi and put them into a situation that causes danger to the other Sailor Guardians.

We’ve got tons of tropes that are tossed around here–  the breaking speech moment where Makoto is snapped into fighting back by Sailor Moon’s counter argument about love.  The biggest issue though that I have found with this episode is the large contrived coincidence played in the second half here.  So Furu is attacked by Nephrite’s minion bride into to being hypnotized into sucking the energy out of Makoto– and this was being seen by Tuxedo Mask?  Too convenient for him to be there and put things in motion for the Sailor Guardians to act against Nephrite and save Makoto.

Nonetheless, this was an entertaining episode for fans of the series that have wanted a revival for quite some time–  the artwork is nicely drawn with fluid animation,  a faithful soundtrack reminiscent of the 90’s anime series and a relatively good start to a wonderful mahou shojo series. 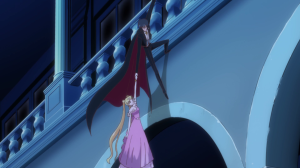 With the departure of the Sailor Guardians introductions we are treated to a slightly different episode.  This was probably the best one we’ve had so far as it takes the three Guardians– Usagi, Rei, and Ami against Nephrite.  Great development between Tuxedo Mask and Sailor Moon adds to the drama here.  Mutsumi Ito the writer of this episode knows how to create fluffy atmosphere– I only say this because of how well done all the action is in this.  None of it is intense, gory, or kills off characters for the sake of being interesting this show uses a very simplistic approach with the drama genre.  Good to have a writer whose worked on the Precure series maintain a light momentum to get the story going, and here it jumps ship from the formula!  The Sailor Guardians try to get ahold of the treasure that Princess D is set to be unveiling at the masquerade party.  Not does the background allow for Usagi the hide in from the crowd but this also builds upon the suspicions of Tuxedo Masks’ identity further.  Nice contrast between Nephrite and his shadow hidden inside of Princess D.  Once again this adds to the drama in a fairly delicate way.

For those that don’t know this show will be a 2-cour run for every two weeks– it’s hard enough to wait each week for another episode let alone two! Since BLEACH ended, Naruto and One Piece are about the only long-running adventure series airing right now it would be great to see this series run along that crowd.  The manga is fairly solid and has an interesting premise, so it would be nice to see this show at least get the same treatment the FullMetal Alchemist: Brotherhood series got– 64 episodes.  Talk about a faithful adaptation of a manga. 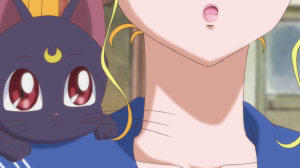 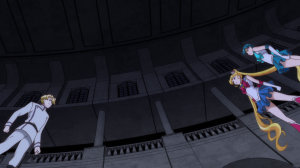 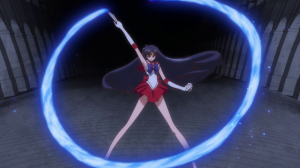 This was a little better than the first 2 episodes. Sailor Mars enters the story and if I recall her backstory was fairly interesting.  She wasn’t just a student, but a shrine maiden that is already connected with unusual powers–a lot of shows tend to thrown in teenagers with mystical powers without a moments notice but Sailor Moon gradually builds up the drama here.  Parents worried about their missing children developed this at length, I was surprised at how much time the creators spent with creating this atmosphere for Rei.

Jadeite is called out for his failures by Queen Beryl and once again he is allowed to fight the Sailor Guardians using his ice powers.  Captain Earth followed a formula between episodes 13-17 and here we’ve got a fairly similar formula– as the Shittenou attempt at finding the legendary silver crystal they are thwarted by a new Sailor Guardian each time.  It’s great to see as this story is a simplistic straight-forward anime in the shojo- genre. 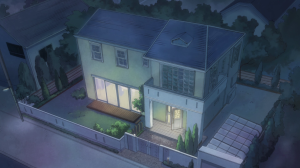 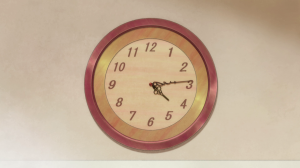 The opening is very traditional but those CG transformations are really weird.  Toei why couldn’t you have just hand-drawn those sequences using standard animation techniques?  I guess we can’t have everything.  This reboot has been anticipated for years and what do we get?  A faithful adaptation of the manga where the plot is moving pretty slowly here, the CG is awkward most of the time and Usagi’s seiyuu Kotono’s is very underplayed for her role.  Seriously whose decision was this to bring her back?  This has been horrible even in this second episode!  The casting for Sailor Mercury was fantastic– she’s actually young and this adds the the authenticity of the show as a whole.  Hope that they’ve done this for the rest of the Sailor Guardians.  Hisako Kanemoto if anyone is familiar with her voiced Sayaka in Kawai Complex, Mai of Photo Kano, and more notably Amy from Susei no Gargantia.  She’s fairly new to the industry in the last I want to say five years or so, but she’s a fresh addition to bring to a classic shojo series such as this!  I really like how simple everything has been laid out so far– the villains continuously fail at capturing youth essence but just keep coming back to even capture Sailor Moon herself.  This worked out wonderfully as it was a nice way to bring in Ami’s character. 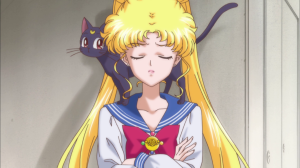 Finally after 22 years since its debut of the original series we are presented with a reboot of a show that popularized not just anime but the mahou shojo genre!  Toei Animation returns to adapt the popular manga by Naoko Takeuchi.  As a kid I recall watching this series as it aired alongside Dragonball Z, Thundercats and Johnny Quest over the course of its programming.  This show was popular and probably even more so than Cowboy Bebop when people talk about Japanese anime.  Developing a remake to follow the manga’s story more closely was talked about for years but here we’ve finally got the first episode in 2014.

I’ve got to say this show’s animation was designed differently to the ’92 anime adaptation but more faithful to the manga’s artwork.  It looks great!  However the departure of Junichi Sato is sorely missed on this classic rendition- we’ve got Munehisa Sakai at the helm.  This has me a bit worried I mean this guy has directed like what?  One series?  Suite Precure.  Compared to Heartcatch Precure, Suite had terrible animation and lacked any elements to draw the viewer in.

Sailor Moon Crystal’s first episode had solid pacing, beautiful animation and incredibly well-done music!  Seriously!  Takanashi composed for Mononoke, Shiki and Toward the Terra.  All of these are amazing series one of which lands in my Top 10 best anime!

Aside from the music, we’ve got a young cast to portray a lot of the characters and yet the creators decided on casting the original seiyu.  Kotono Mitsuishi.  Wrong move guys.  A 46-year old seiyu to play a 14-year old school-girl?  It sounds strange right?  Well this was the only horrible aspect of the entire episode!  Hopefully they can do something this as the series progresses!