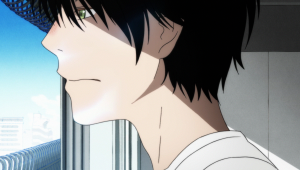 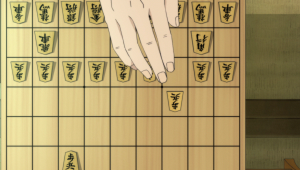 PLOT: The protagonist Rei is a 17-year-old professional shōgi player, who lives by himself, not having a real family, and has scarcely any friends. Among his acquaintances is a family, which consists of a young woman, Akari Kawamoto, and her younger sisters, Hinata and Momo, who also keep several cats. As the story progreses, Rei deals with his maturing as a player and as a person, while developing his relationships with others, specially the Kawamoto sisters.

I decided to change things up a bit and not post so much information on production staff regarding previous anime they’ve worked on.  Hope you all enjoy it!

One of the most anticipated series of the season finally arrives! This adaptation is quite different than what I expected from when it was first announced. This turned out to be quite a solid piece of work.

An incredible use of sound and SHAFT uses creator Chika Umino’s slow-paced story to its advantage with director Akiyuki Shinbo at the helm!  Per Umino’s request! From the trailers and now this first episode I can tell that SHAFT put a lot of restraint on how they typically animate their shows like the Monogatari series.  The first half is a beautifully animated and very subdued long morning for the protagonist Rei Kiriyama.  SHAFT certainly was the right choice in this because they were able to breathe life into Rei’s dark objectified view of the world and flip it with a superb second half.  The animation is simply designed–using a solid palette structure for its backgrounds.  At first glance this isn’t an anime with a large budget like what we’ve been seeing with Yuri!!! on Ice! , but when you see this episode you can clearly get a clear indication that a lot of time was spent on the direction of the animation.  Closeup shots of objects (especially the drinks) and facial expression techniques.  The most important develop of this show is through its use of sound effects!  From the very first scene it’s clear that there is a certain level of discomfort in Rei’s home. He’s internalized all of his emotions (if he has any) and through a very smart stylistic choice in visuals and sound direction that Rei is suffering.  Without the addition of music until the shogi match illustrates a larger picture that Rei enjoys his isolation.

I think it says a lot when a series chooses little dialogue to capture an audience into its narrative. We don’t know the man he’s playing is his father until he sees a news report later on from a tragic unrelated event. Sound was crucial here–the report established Rei’s disconnect from his own circumstances perfectly!

This transitioned nicely into the Kawamoto family’s introduction. Bubbly music score and strikingly bright animation.  Hues of pinks and yellows represents how lively the family is–the antics with the younger children remind me of 7-year old Naru from Barakamon.  The animation in the second half of this episode reverts from the dismal and dark tone that Sangatsu no Lion originally went for!  You either like the style or you don’t. 3-Gatsu no Lion is different than what we’re used to seeing with shows like Honey & Clover.

Akari Kawamoto, the oldest of the three sisters notices Rei’s disconnect from society–it is seen when she, right after Hinata had texted him, requests that he pick up vegetables for the dinner. I like how this show doesn’t force the interpersonal relationships down our throats–we given small details in doses.  The news report, the text messages, even by the end of this episode we see that Rei is gradually crawling out of his shell through the use of shadow effects and dream-state imagery.

I’m actually quite glad that this premiere didn’t shove Shogi matches to explain his character in-depth.  Using a visual narrative and a down-to-earth family to establish his grounding in the world succeeds wonderfully!  Posters of the manga on the train, Sangatsu logo on the grocery store sign. Perhaps SHAFT was taking the source material advertising a bit too literal.  Although, it certainly is one way to do it. 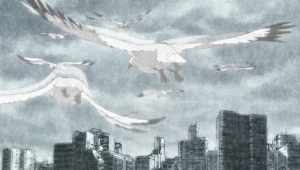 Hironori Tanaka animated many of the opening scenes for this, notably, Rei’s drowning and the majority of sections featuring water sequences.  A bit of history about this animator. He’s well-known in the world of sakuga having worked on some very popular series including School Days, Fate/Stay Night Unlimited Blade Works, Gurren Lagann, Bakemonogatari and one of my favorites The Tatami Galaxy.   I believe what stands out best as his best work as a key animator is on director Kou Matsuo’s Kure–nai.  Episode six to be exact–featuring a musical sequence.  Sometimes there doesn’t need to be -in-between frames when there are many key frames used.  Typically TV Anime do not produce this level of quality, however, there are times when this style of animation is utilized. This seems to be Tanaka’s style resulting in a very smooth flow to his sequences. He’s one of a few animators to be experienced and designs scenes with a purity to them . I say pure because he is able to draw 50 to 80 frames just to get a sequence nailed down properly.

Sangatsu‘s opening has very beautiful animation with varying shades of blues and other dark tonal colors that mesh together with a powered pigment influence.  BUMP OF CHICKEN are back for the anime adaptation reprising their role in 3-Gatsu no Lion material with both a well-designed opening and ending sequence.  They definitely delivered an emotionally-charged and well-written indie-styled rock song that matches these visuals beautifully.  Rei is drowning without a pathway to follow in life–the visual cues with the doorways represents that he has many choices in life but doesn’t have a grasp on his own life yet. I really like how the song gives an uplift with the chorus and suddenly the animation changes to firefly visuals and the family that has taken a chance on him might just give him the push he needs to figure out his life goal.

Extremely uplifting visuals. BUMP OF CHICKEN does a fine job in the music department here–using an emotionally engaging song about having the courage to trust another person and open up your heart. The visual style represents the color hues of Nisekoi‘s opening sequences. Beautifully drawn backgrounds! I really like the neon outline of Rei’s shadow as he’s flying through the air– the blue seems to represent that he’s finally found his courage.