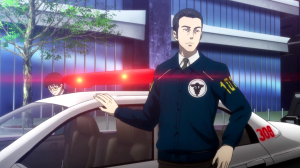 I’m going to keep this short because I feel that the review of the final episode covered most of my thoughts on this series as a whole.  When I heard that a second season was announced for Noitamina’s 2014 lineup I was overjoyed.  It’s been awhile since we’ve had a really good cyberpunk anime series, last one that I can remember having such an influence into the genre was the Ghost in the Shell Stand Alone Complex series that Production I.G. developed in the early 2000’s.  The first season of Psycho-Pass used wonderful ideas about a futuristic dystopian society that followed the rules under a secretive system that with the first season had been let out of its cage by an asymptomatic killer Shougo Makishima and his tenacious behavior at influencing others to unleash their own aspirations of behind heard through killing.  Following the events with Kougami gone missing, Akane gaining the Shepherd I title and having complete authority over Division I puts her into quite a strong role for this second series.

Kirito Kamui, one of the series villains was used here as the focal point in evolving Sibyl into a collective entity but threw Akane to the sidelines by the end.  This wasn’t the only part of the show that went wrong here:  Yugo Kanno’s strong orchestral sound was replaced by a new style of his that did not work one bit–  electronica.  Also the series’ writer was changed from Gen Urobuchi to Tow Ubukata of Mardock Scramble and I can definitely tell it’s in every way inferior to its predecessor.

New enforcers were unveiled in this second season with Sho Hinakawa whom only speaks three words in the entire show that barely has screen time voiced by Makishima’s seiyu Takahiro Sakurai.  Then there is Sakuya Togane a mother-obsessed enforcer that oddly reminded Akane of Kougami of the first season a few times that turns out to be the other villain of this series with this highest crime coefficient ever recorded.  I think what targeted this series wasn’t the story as much as it was its under-developed characters including the schoolgirl-turned inspector Mika Shimotsuki that was more of an annoyance to not just the people she worked with but the viewer as well.

With the return of Production I.G. in the animation spot for the film and Gen Urobuchi’s return for the script I hope to see great things just as I did with the first season.  As for this second season this was a great example of what doesn’t make a series shine.