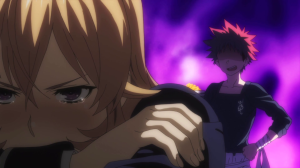 The Spring 2015 anime season has so much to offer that is both bad and good–  as for reviewing I’m watching a new series’ episode just about every day on top of series I’ve neglected from the Winter 2015 Season and even anime from the Fall 2014 lineup.  It’s quite a list and I hope I can continue maintaining this blog for years to come [hopefully with the inclusion of another writer or two possibly].  More importantly I hope that my readers enjoy these sometimes short writings each week on their favorite episodes.  Speaking of which I need to continue watching [C] the Money of Soul and Possibility CONTROL.  If there is a series you would like to see me cover–  I will try to get to writing a full series review if its aired in a previous season.  So please let me know through the comments section.  Now onto Shokugeki no Soma‘s 2nd episode!

This show is really funny but the problem of a long gag between food being an erotic pleasure can only go on for so long without running out of steam.  This episode works perfectly in bringing in Erina Nakiri, Totsuki Corporation’s examiner.  I like the chemistry between Soma and Erina a lot.  Their introduction here enriches this series’ comedy to a refreshing level.  It pushes away at times the reflective compatibility between its characters in favor of developing them through the culinary education program Soma is trying to get into.  Soma’s blatantly obvious brash behavior is a good balance to how Erina acts.  Her chauvinistic culinary upbringing as ridiculous as it is establishes this sense of  prestige the distinction between being of a higher class to a commoner quite well.  I really like how we see this foreshadow from Nikaido Yoshiaki and his dialogue with Soma about how much Totsuki caters to the elites that apply.  Erina throwing all this away by using her own methods is a smart tactic on her part as an examiner and I’m sure its this factor that will bring Soma closer to realizing how important the delicacy of a dish really is.  The dish Soma prepares featuring eggs with rice is a nice touch to illustrating how traditional Japanese food is handled–  which is miles apart from anything Erina has ever seen before I’m sure.

Erina looks the other way using the background discrimination trope and handles herself justifiably right up until her first bite.  Her reaction is priceless and to her own initial thoughts:  shocking.  Shokugeki delivers fan service that is rife and very intense–  now I can see how Tatsuya Katou’s music score works here.  Heck even his father’s situation in New York is downright crazy when the tribe from India shows up.  I’m curious how the creators are going to handle the drama portion of this show because right now it’s been all comedy.  Where’s the educational aspect of this?

Sometimes this show will need to learn to tone it down and reel us into the joke by setting up these build-ups instead of just overlaying it with intense moments one after another. 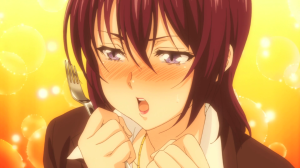 PLOT:  Soma Yukihira is a son of a restaurant owner. He’s talented at cooking and can make new dishes, mostly weird and epic combinations (squid and peanut butter) but this wide imagination of his also led him to create wonderful and unique foods. However, two to three years from now, the restaurant is on the verge of closing since his father will be working together with his friend. Before the time comes, Soma began studying in Engetsu Teahouse Culinary Academy, Japan’s top culinary academy. For him to continue their restaurant business, he must learn and improve his cooking skills in this prestigious academy.

Being behind on so many series I’ve decided to skip my Season 2015 preview and jump right into anything and everything that I have time for to watch this includes older series and shows that I haven’t watched in months.  [Looking at you Sailor Moon] Sometimes I wonder if I should make this a multi-author blog with how many series I want to write about.

One of the most popular manga as of late happens to be Yuto Tsukuda’s shonen cooking comedy series Food Wars: Shokugeki no Soma.  It’s funny really really funny and I like how captivated the characters are when they try food–  such high energy that this anime adaptation does well at capturing.  Interestingly enough is that this is loosely based on the American reality show of the same name.

Soma Yukihara has a dream to be a chef full time and encounters quite a tough reality from the get-go.  He challenges his father and the tasters with very good and extremely bad food–  the octopus peanut butter dish is hilarious.  It might have been overly exaggerated in the sexual references but I’m sure that isn’t what this show is going to fully focus on.  It’s fan service humor that works in making a somewhat boring concept of a series and changes it with fantastical elements.

This episode has so much energy to it and I like it.  It’s refreshing to see a series that takes the capitalizing idea of fan service in the anime industry and uses it to its advantage.  To bridge the gap between a realistic cooking series to an animated one.  Yoshitomo Yonetani directed Tiger & Bunny not to mention Dororon Enma-kun Meeramera, so I can clearly see his influence to develop just about each scene with such intensity.  This episode also explains what was used to make that dish Soma prepares in order to save the shop and I like how the creators chose a simple animation style of labelling to get this point across to the viewers.

The character designs aren’t too bad they’re a cross between Tomoyuki Shitaya’s work on Bakuman and the moe-style of Toradora!.  One part of this I didn’t like is the music–  it is too adventure-esque for a simple anime.  It works with Shoma’s challenge to Yaeko Minegasaki but other than that I felt it was extremely overstated. They should have planned this better by using a composer more subtle–  for instance ko-ko-ya [Ristorante Paradiso composers].  They would have done a good job at building up these intense moments.  Nonetheless this is a fun series to watch.

Tomoko Nagashima’s rough edgy voice works really well with the light guitar rock chords in channeling this idea that Soma will be going on a cooking journey.  Reminds me a lot of the style that the Barakmon’s opening sequence had.

Freaking awesome ending.  The animation is weird, sexually suggestive that shouts out that food is intoxicating and fun when you have people around.  Lisa Komina has a bright upbeat voice that resonates ridiculously well with the average drumbeat and fast guitar/bass backdrop.  Really funny how everyone is naked in the first part really portrays how the aftermath of trying food is a transcending experience!