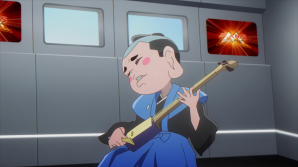 The American idol of anime and this episode uses that to its advantage. Not only that but Carole & Tuesday charms its way into giving us more information about the girls–specifically Carole. Director Watanabe certainly knows how to create these small self-contained situations and build them up in extremely subtle ways. Carole and Teusday get ready for the Mars Brightest comeptition, much like American Idol, where aspiring singers/musicians come together, compete and try their hardest to make it big. As before, we know that Carole and Tuesday are from entirely different backgrounds, their chemistry together makes them a joy to watch because of this and here is where we get to see that pay off wonderfully. I am actually really glad their song for the audition is shown because we get a lot more focus on the personal relationships between them. The auditions is where the comedy of this episode shines– the reference to Vistas The 7th Element song comes out of nowhere and lands perfectly! Some extremely varied performers here–the grandmother’s chicken-esque dubstep, the return of IDEA from episode 4, the samurai’s

From what we gathered before Carole is from a refugee camp, raised in a church orphanage never having known her parents from Earth and the creators delicately put this in during their audition creates this huge impact on Tuesday. We know that Tuesday is from a wealthy family, and running away from a rich and sheltered lifestyle says a lot about her. The discovering of Mars and a life she could be living. She’s never had it hard and she’s just discovering that from the first episode of the series.

This part of the story, specifically this episode with having learned of Carole’s past for the first time shows us that there are people out there that are have had a more difficult time living. Tuesday can’t seem to wrap her head around that just yet. The respect she has for Carole stems from her staying true to herself, never backing down and never ever giving up–something of which Tuesday wishes she’s had all along. She sees how loving Carole can be and for Tuesday finding that warmth inside of her is quite difficult because she is so wrapped up in herself, from running away, keeping her identity a secret, that she lacks confidence that ultimately presents the selfish jealous side towards Carole. It is towards the end of this episode that we get a full view of how inspirational and influential these two can be towards each other. A rock to lean on one another–Tuesday doesn’t recognize the happiness she’s found within herself about singing and playing the guitar because she’s scared of seeing where it might lead. Carole reminds her of this in an honest and heartfelt way that it ultimately leads to Tuesday sharing a bit more of herself. I really am glad to see this happen so early on for the reason that we’ve focused on the music portion and what makes them special together and now we’re seeing this realistic portrayal of friends outside of their element. It’s refreshing.

Then there is Angela Carpenter. We’ve seen much earlier on that she’s been living alone, she’s been invited back home by Mama Dahlia but it’s clear now more than ever that she doesn’t miss her home life–the eye-catches of the family photos, the dry blood on the wall, and most importantly Dahlia’s side-effects to the drugs (presumably from transition) represents the aftermath that left Angela’s sweet and accomplished child-star life in shambles. This causes her to lash out at others and her approach of “I won’t loose to some amateurs”.

Influence seems to play a lot in this show–we’ve had Roddy and Gus become the stepping stones in to getting their music out there, Carole’s landlord becoming understanding of Tuesday’s situation with their first gig and now the guy from the laundrymat during their song “Round & Laundry” from episode 3 shows up randomly.  This creates this influence I mentioned earlier–these girls are slowly building a name for themselves in the smallest of ways. Great moment!

Anyone catch the Cowboy Bebop reference towards the end? “Whatever happens, happens”