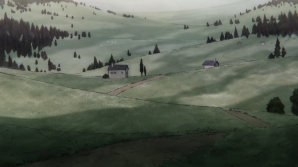 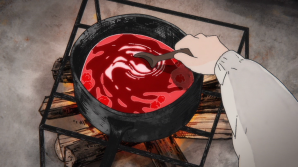 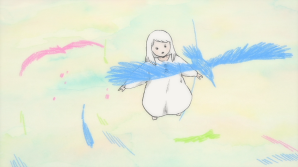 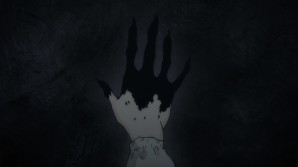 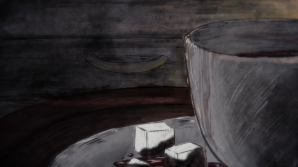 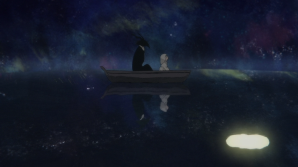 PLOT: In a world split between the Inside and the Outside, those living in both realms are told never to cross over to the other side, lest they be cursed. A young girl named Shiva lives in a vacant village with a demonic guardian known only as “Teacher.” Although the two are forbidden to touch, they seem to share a bond that transcends their disparate appearances. But when Shiva leaves Teacher’s care to seek out her grandmother, the secret behind her mysterious living arrangement comes to light. ~ANN

Animation Production: WIT STUDIO [Animation Production on the following works: The Ancient Magus Bride, Shingeki no Kyojin (Attack on Titan), Koi wa Ameragari no You ni (After the Rain), B: The Beginning, Bungo Stray Dogs, Empire of Corpses film, The Great Pretender, Hal film, Kabaneri of the Iron Fortress, Owari no Seraph (Seraph of the End), The Rolling Girls, Vinland Saga, Under the Dog ONA“]

Based on the Original Manga by: Nagabe

Ever since this was announced back in March I was overjoyed it’s an excellent manga. The manga has received numerous awards for its telling dark love story of a young girl, Shiva, and a mysterious creature named only as “Teacher”. Loosely based on an Irish folklore story of romance the manga of the same name focuses on a relationship between a human girl and demon and their connection through touch that can never happen.

This OAD (Original Animation Disc) is more of a test of a new expressionistic approach. Balancing between light and dark colors. An advertisement for the manga –so if you don’t really know the story you can still enjoy this however, if you’ve read the manga up to at least volume 7 you will notice parts of the manga they’ve animated and have an understanding of these characters. Nonetheless, watching this is a visual feast that is unique and beautifully captivating.

Directed by two up and coming directors– Yutaro Kubo and Satomi Maiya. Kubo has been directing animated shorts and music videos since 2013 including the amazing Kicking Rocks which you can watch here. With Kubo, he’s got this way of animating that feels real with an edgy tone to it. When you see movement you can notice it would take that long amount of time for the movement to occur.

With Siuil a Run, Kubo’s sketchy frenetic drawing/animation style provides a lively and bizarrely nurturing view of its two characters, the nature that surrounds them and objects especially clothing.

Maiya’s painterly form is very expressive. Heavily, showcased in this with one sequence that focuses on a dream Shiva has. Relying on pastel colors to define a wondrous world that is quickly consumed by darkness. Thanks to the use of some incredible chalk-es

Schroeder-Headz musical style suits this animation experiment wonderfully. A band that is comprised of mostly of drums, bass, and a piano. Named after Charles’ Schultz’s Peanuts piano player Schroeder. Their style pays tribute to this character through the use of a variety of genres– jazz , electronic, and classical. It’s as if you could envision a young person with all this talent performing these songs.  A mystifying release of imagery through sound that channels the unique wet ink drawings of Siuil a Run to great heights. I can’t imagine how good this would be as a full fledged series! Mushishi’s sound director Noriko Izumo matched with Schroeder-Headz’ experimental sound makes this one to check out. The effects of grass swaying in the wind, the footsteps that move from heavy to soft– from Teacher to Shiva. Without a single line of dialogue, Izumo had to establish how this world would need to be presented to its viewers to tell a story.

WIT Studio relied on various art techniques to reflect a storybook presentation that retains the artistic nature of the manga. A cleverly imaginative approach to depict sugar cubes dissolving in liquid to parallel her fears. Life is sweet but can be scary at times. Siuil a Run’s background art holds this pale warmth to it. A combination of faded brush/cross-hatch style. Mixed with object motion that carries a lighter weight. Brighter colors that stand out to in the foreground and you get really strong animation frames especially with the fire sequence with the cooking pot.

This short, with a runtime of around 10 minutes, is an enchanting story exploring Shiva and Teacher’s everyday life in a rural countryside. A pictorial perspective of a world of fantasy. Where fairytales aren’t always good. This is depicted by Shiva’s character’s clothing choice. A white robe illustrates her innocence– that there is a large world out there waiting to be discovered. Teacher, a demon that acts as her guardian wears a formal attire to attract the idea that he isn’t all that scary even if he’s a demon. Not much is shown in the way of the manga’s story–without the use of dialogue but you still get a good perspective on their relationship.

I hope one day WIT STUDIO returns to this project for a full-fledge animation work. It is extremely unique and the manga’s story is excellent!