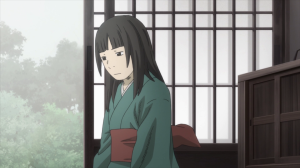 The bonds that tie humans together are sometimes the best kinds of stories to have–  especially when this idea is used for an episode of Mushishi.  I love this series, and it’s a series that I’ve missed for a long time after having such a long absence between the first season.  Great to have this series back!  Not a series for everyone as anyone that is looking for action-based anime series will not find that here.  This is a calm and relaxing series that is ultimately rewarding by the end and the story here emphasizes this idea of human relationships quite well!

A young girl Sumi is able to feel the presence of her close friend Yura by the influence of a mushi.  Worrying her father embellishes the family relationship that this story contains in enhancing the small town around it.  Reflects a lot of the episodes we had in the first half of this series–  Mina and her father from episode two, the sake brewer story in the first episode.  Probably the strongest link to this episode has to be the special OVA from January about the two sisters and the sun-eating shade.  Tons of parallels across these widely different episodes gives the viewer a larger look into Ginko himself and how he understands mushi and the connections humans have with each other and the supernatural.

The stream that runs through the village illustrates the connection portion of this amazingly well.  The mushi, Kairogi living in the consciousness of humans that have ether.  Neat concept to use here–  the parallel here is that the stream conveys a message to the viewer visually that the Kairogi‘s host can send thoughts to anyone.

What I liked a lot about this episode is how it carries this weight that the Kairogi can affect Yura without much done on her part–  she doesn’t understand what Sumi is doing since she isn’t with her and while being apart turns out to be the main focus of this friendship she herself can still feel what Sumi’s thinking.

Yearning to sever ties with her for being stuck in feeling everything that Sumi’s feeling pushes this slow-pacing tale further.  By bringing in the father’s thoughts to Yura enveloping the entire connection through the whole town by using a set of dreams that villagers end up having at the very end.  Portrays this etherial side to the mushi that I had not really noticed until the fog scene at the end of this shows up.  Great imagery there to bring not just the villagers together but Yura and Sumi and the inevitable long-lasting bond they share.

This was a spectacular episode and it is really going to be tough on picking my Top 10 Best Anime Series of 2014, Top 10 Best directed episodes, and even best endings.  Great story here with stunning visuals and a soothing soundtrack!