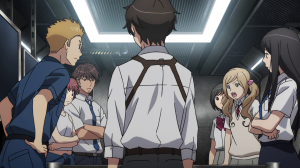 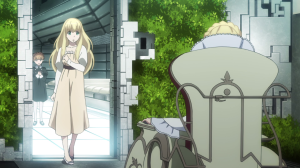 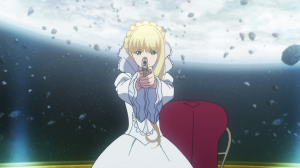 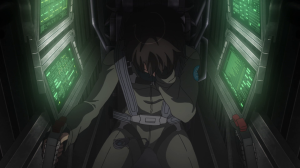 That sure was some cliffhanger there with Lemrina discovering Asseylum isn’t stuck inside her cage anymore.  To be honest I wasn’t expecting that outcome between the Princesses but somehow it manages to reel me in because of where it places Slaine for future episodes.  He’s totally screwed.  Is it just me or is he a lot more like Lemrina here:  unable to do anything.  How will he get out of this or is his last ditch effort going to be explaining that he’s been working with the Terrans all along.  A protagonist to antagonist in this second half that could pull a reversal by using the redemption trope.

Aldnoah Zero surprisingly enough has a formula to it that is very similar to Shiki—  by splitting up the cours and the perspectives of the antagonists and protagonists we have this shift in power between these characters.  While Shiki held up its momentum by placing the vampires and humans on different footing with their varied ideals, Aldnoah Zero goes from Terrans to Vers but without a strong follow through because of its leads changing the story for the sake of building up intense drama.  It’s good and all but not when you’ve got the minor cast sidelined except for the awesome Mazuurek.

Favorably though this episode uses the three Kataphrakts to establish Inaho’s issue greatly:  his eye is giving a hit to him physically.  This fight here was incredibly animated and while we see the usual:  Inaho’s quick wit to get out of impossible situations it does in fact take a toll on him.  Something that even Inko noticed in an earlier episode that does raise a death flag towards her:  she likes him and could save him after his eye doesn’t work in one of his planned-out scenarios from a Vers Knight.