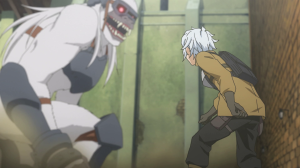 Anyone that has been following my blog can tell I’m a huge fan of the inner workings of an anime series.  As much as I like Manglobe and their works on Michiko e Hatchin and Ergo Proxy I must say they look like they might have lost a few of their key animators and background artists in the process of not having any work for a full year.  GANGSTA has quite a few distorted faces and lack of detail in their background art for a few scenes.

J.C. Staff is on a roll this year.  Once this year winds up they will have produced six animated works total.  Two shows per season not including their key animators working with other production studios throughout the year!  I’d like to see them do an original work because they’ve got potential when it comes to fluid animation and character designs staying consistent.  I really enjoyed the idea behind this show–it dissolves any idea that there is a player out there controlling Bell Cranel.  DanMachi, umps ship by making this into a truthful full-fledged series with role-playing game elements.  Bell’s mysterious leveling up is straight out of a classic game of Dungeons and Dragons!  Freya and Hestia tackle Norse mythology as its clearly seen with this episode we’ve got competition between Gods.  In this case, Familia represent Norse Gods–  Hestia is the Goddess of Fire and Hephaestus means forging.  This show has a ton of potential to be a harem series as the title suggests.  Honestly, I believe it works for this show because Bell’s true goal is to win the affections of Aiz Wallenstein after his life is saved by her from a minotaur.

Hestia’s relationship with Bell is comical because we see that Bell is constantly uncomfortable of Hestia’s romantic advances.  This episode allows their relationship to become more interesting when Freya puts Bell into a dangerous situation. I’m really glad the creators didn’t dive into the heart of the story with this 2nd episode because we get two full episodes now of world-building and character development. 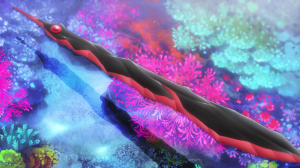 Generic J-POP but it works for this videogame-esque fantasy show.

Wow. This song was actually pretty decent coming from Kanon.  She actually knows how to sing which is a surprise considering how horrible her songs have been the last few years.  The instrumentals are slow-moving and the visuals are really good. Watercolor art backgrounds with kawaii designs of the main cast.  For a show to have a focus around the main character winning girls’ hearts by leveling up this definitely works.