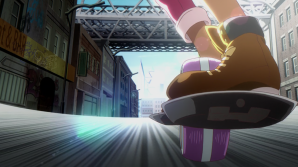 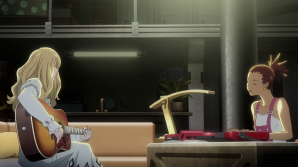 PLOT: Fifty years have passed since mankind began migrating to the new frontier: Mars. It’s an age where most culture is produced by AI, and people are content to be passive consumers. There’s a girl scraping a living in the metropolis of Alba City, she’s working part-time while trying to become a musician. She’s always felt like something is missing. Her name is Carole. There’s another girl. Born to a wealthy family in the provincial town of Herschel City, she dreams of becoming a musician, but nobody around her understands. She feels like the loneliest person in the world. Her name is Tuesday. A chance meeting brings them together.

Music: Mocky (Canadian singer, music producer, songwriter and composer) (Co-writer on the following songs: Bittersweet Melodies, Graveyard, and Caught A Long Wind” off the album Metals by the artist Feist.)

The time has finally come. Another Shinichiro Watanabe anime series. It has been five years since Space Dandy and Zankyou no Terror have aired and with that time of absence it has given the acclaimed director plenty of time to craft together his next story. Carole & Tuesday. The story of two girls from entirely different backgrounds that find a connection to the meaning of their lives through the use of music. Singing and songwriting specifically.

Shinichiro Watanabe holds a special place in his heart for music. He used jazz in Cowboy Bebop–this not only put his name on the map as a sensational director and creator but also for Yoko Kanno’s career as a composer. Bebop was a huge hit in the United States (in its original run on Japanese TV not so much) and this allowed the viewership of Japanese anime to expand to a wider market.

With his next series, Samurai Champloo he infused the traditional sounds of Japan–the shimasen, taiko drums, etc. with Nujabes, FAT JON, and many others using hip-hop against a samurai backdrop with a story of a girl in search of a samurai that smells of sunflowers.  In 2012, he turned to Yoko Kanno once again to Yoko Kanno for her acclaimed work on Bebop’s jazz score in order to faithfully adapt Yuki Kodama’s award winning manga Sakamichi no Apollon (Kids on the Slope). 2014 was high big year to shine, because he put together two series in the same year. Zankyou no Terror, a story about two teenagers on a journey of retribution. This time Kanno’s score turns to Icelandic atmospheric music to setup a modern day drama. Now we’ve got music at the forefront again and this time in a very special way. One might notice that this show maybe shifting it’s musical influence towards pop music.  Cyndi Lauper’s “True Colors” (the name of this episode title and also shown in the intermission artwork) becomes Teusday’s inspiration in the pursuit of music.

Carole & Tuesday was initially announced in March of last year as a 10th anniversary Flying Dog and 20th anniversary Studio BONES production. Worldwide auditions were held for the lead characters (Carole and Tuesday’s) vocal parts. And we get the fantastic Tokyo born Japanese pop and R&B singer Celeina Ann for Tuesday and  Nai Br.XX (from New York) for the role of Carole’s singing parts.

Now onto the premiere episode!

Tuesday is a shy and timid girl trying to make her life something special–with her guitar and robot luggage she begins her journey to Alba City for a different life. Did anyone catch some of the callbacks to Shinichiro Watanabe’s previous series? The narrator portraying a more integral comedic part for this show indicates the callback to Space Dandy’s narrator. The robot charging was an homage to QT from Space Dandy running out of power–the comedy in that was pure genius and we get this first glance at how Tuesday reacts to things that don’t exactly go as planned. Tuesday is this shut-in living life in a rich family household but even in the first five minutes of the show we see her struggle–this is especially reflected in the character animation and expressions.

Carole’s introduction is wonderfully timed–Mocky’s soundtrack (which is reminiscent of Michiko e Hatchin’s score by Kassin) fits this perfectly as we clearly see her wildly cool energy she gives off. Heck, the framing in this compared to Carole’s is heavily angled (especially during her skateboard sequence) to establish her character a little bit more and this “I live on my own, have a job, so I’m forced to be an adult out of circumstances). She has her own place and her early adulthood gives us some inkling that the parental situation is something of a stepping stone for her through her music. The restaurant sequence provides a nice look at how nefarious people can be–balance that is foreshadow to the next scene with Tuesday. It seems to me that one of the larger motifs in this show will be the empowerment of teens being true to themselves and singing out their hearts. Tuesday is breaking away from the sheltered life that she has been living up to this point. Carole yearns for a brand new life— from the boy trying to steal to the men treating her like trash in the restaurant outlines this quite clear. It wasn’t until the commercial actress Angela is riding in the car with her mother that the motif hits the nail in the coffin for this series. Trying to reach your dreams. Her mother not wanting to achieve singing pours out this fact that she’s playing right into the hands of her family as some doll. I’m glad we get to see the parents already and they aren’t shoved into the story too late.  Given the mother’s reaction that the guitar is missing might suggest that Tuesday is an AI. Angela’s mother mentions how she could turn all of her managers into AI, and the fact Mr. Tao’s line of work looks more than meets the eye validates this theory I have about Tuesday. AI’s are replacing the singers of the entertainment business, in Carole and Tuesday it is a story of a world without music and art. A world tied by the boundaries of society dependent on emerging technologies–many of which that have removed any kind of free thought of expression with a voice to shout out with. I find it really intriguing when Carole starts playing on the bridge that no one notices her singing and the police officer chasing after them just adds more cause to this. Confined by the companies that have built these AI’s on a higher pedestal than human entertainers.

The chance encounter between the two girls, Carole and Tuesday is well timed. The soft grainy editing is a smart choice to quickly introduce us a meaning behind their dreams in becoming musicians. An entire episode focused on a heartfelt buildup to their first song performance at Carole’s place. One that is beautifully animated by Takashi Mitani. These two girls aren’t creating music for some higher meaning or fighting off society rather it is how they want to express themselves. We clearly see the beginnings of this and a blossoming friendship where Carole posts their very first selfie on Instagram. A real instagram for Carole_and_Tuesday was created some time ago  which you can check out here (As of writing this its at 21.3k followers within the span of a few days!) and follow Carole and Tuesday’s journey together! Keep in mind that this series’ backdrop is set in the future with some incredibly detailed art but I want to point out how the new media affects the society structure and people’s interactions with others. That small instagram post allows for these two smaller artists to gain traction. Social media can be skewed in favor to those that have money and the resources–it’s who you know and in Carole and Tuesday’s case this is only the beginning of their influential change to the world(s?) and their popularity.

Like I said before this show is about spreading the freedom to express one’s self and for these girls it goes from a small indoor practice session to shouting at the rooftops just learning that they can be anything they want to be even if society won’t accept it.

Also want to say how shocked I am that this show is going to be 2-cour! 24 episodes!

Norimitsu Suzuki is a freaking awesome animator. Having animated the UN-GO ending sequence, the adorable Soul Eater ending 2 with Maka’s walking cycle, among many others! His walk cycles are incredibly fluid and give a lot personality and physique through the attention to a character’s clothing and movement in the arms and legs. He animated this entire sequence by himself. Incredible. This is a treat because the song gives us an idea of how their music might turn out in future episodes once they are heavily produced. The lyrics that bubble through the background shows this off as some kind of pop music video. The grey transition into color of Carole and Tuesday and its background choice sets a charismatic tone that adds layers to their music to greater heights!