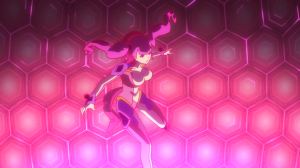 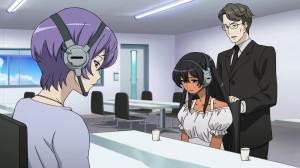 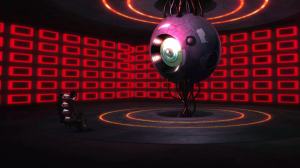 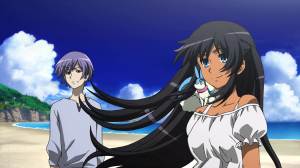 I am fairly certain that this series is running off just like STAR DRIVER did. The animation continued to impress this episode. It was really consistent! The animation towards the end had such fluid animation! Finally we get a space battle here! This was something that was missing in STAR DRIVER that I had really wanted to see. This was because that series due to its plot was stuck in zero time and those robots couldn’t get off the island. Here its a refreshing change to see that there is only one robot for Earth that we know of anyway, and we see how dependent everyone especially Daichi’s uncle is on it.

This battle had such fluid animation, let’s hope their budget doesn’t run out on the first couple of episodes here! The idea behind the space robot is very cool to see. I like how they add the parts on from space rings in the first episode, and then this one it was a huge procedure to get this robot to land. They actually took the time to show how much preparation is needed for battling the Kiltgang. Nice detail there!

I do have a few concerning points about how this story is laid out so far. There are so many organizations that want to know who and why Daichi was able to handle a Livlaster, let alone how was he able to make it appear in his hands at will? This was definitely a scene taken from STAR DRIVER, where Takuto was able to dual wield for the first time. I can’t help but think there are a few of these people that are working with the Kiltgang for reasons unknown.

Puck was introduced as this superhuman computer to predict the future. I thought its sense of humor was something else though. Pushing aside that its a computer, being so advanced it was interesting to see the development in this. The idea that it is so powerful its able to convey an understanding of emotion. I am sure this will be explained further.

The OP and the ED were really generic. I usually like Flumpool’s songs though this was was dull. Perhaps it will grow on me.