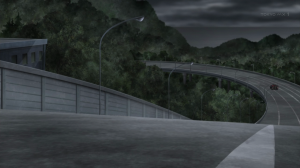 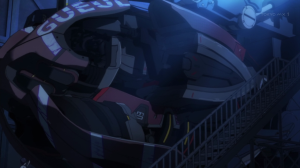 I’ve been pretty disappointed in this show.  Akashi’s emotions sway back and forth so much especially when it comes to Sasame.  Kasane isn’t any different either. Writing the plot as they go along- at least that is what the creators have achieved at doing.  This is so terrible!

Guilty Crown suffered from a similar style and here this was just as bad. Tsugumi is one of the worst villains that I would not be surprised turns out to be a damsel in distress that will be sacrificed at the very end.  It’s mecha shows like this that make me lose faith in them- timorous characters that do not need to be, poorly written plot that changes on the spot.

One thing I’ve neglected to mention lately is how the soundtrack has been fairly decent.  Quite a varied balance between melancholic compositions to some lengthy classical pieces helps this show maintain some interest.  Hajime Sakite’s an intriguing choice for this show- he’s one of the most renowned saw players in the world.  Yes that’s right this guy plays on an actual saw with a bow and it sounds amazing.

Anyway, this show has a unique musical score for that very reason and provides a nice overlay into the heavily grim story. Too bad Mari Okada can’t stray away from melodramatic anime series- M3 has tons of pacing issues especially in this episode.  What was with that insert song during the fight?  Should have omitted this because it did not have the same feeling as the rest of the music played throughout this episode.