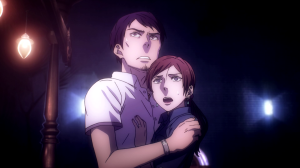 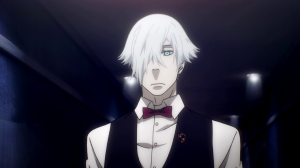 PLOT:  After death, humans go to either heaven or hell. But for some, at the instant of their death, they arrive at the Quindecim, a bar attended by the mysterious white-haired Decim. He challenges them to the Death Game, wherein they wager their lives and reveal their true natures. Decim himself is the ultimate arbitrator of who wins and who loses, who lives and who dies. {Taken from ANN}

Every once in a while a series comes along that sweeps you off your feet with it’s atmosphere, stunning visuals and entertaining stories.  Last year gave us quite a few in my book–  Space Dandy, Zankyou no Teror, Ping-Pong The Animation and Mushishi.  All of these anime were powerful in their own ways and is what defines a great anime series.  I felt that way with this first episode and the OVA back in 2013.

Death Parade is a visual feast with a very original concept–  two people arrive at a bar to partake in various casino games putting their lives on the line. If this wasn’t enough, each character that is introduced here has their own backstory to why they might be there and this adds heart to the mystery of this show.  Eerie by design and sometimes a gory style made this episode flourish!  Before I go any further I want to talk a little bit about how this series came to be with a funded project entitled The Young Animator’s Training Project [Anime Mirai].

The project began in 2010 funded by the Japanese Government’s Agency for Cultural Affairs in order to support and train young animators new to the business with fresh ideas.  Anime Mirai wants to shift the very focus away from outsourcing anime to other countries and maintain what they do best within their own country and what better way to do it than run a funded project series!  This started off with four four major studios in the industry–  Ascension, Telecom Animation Film, P.A. Works and Production I.G.  This is where these studios bid for funding and are selected to produce an animated work for televised length.  These four animated projects that are developed run in theaters in March every year and really show off what new talent they have.  I’m impressed by what we’ve had over the years–  Buta, Ojii-san no Ranpu, Wasurenagumo. And 2013 had quite the collection of works produced for Anime Mirai—  the Kick-starter funded Blu-ray project of Little Witch Academia, Ryo, Aruvu Rezuru: Kikaijikake no Yōseitachi and the amazing Death Billiards by Studio MADHOUSE.  As popular as this short was in 2013 I was ecstatic when I heard it would be green-lit for a television adaptation!

The director Yuzuru Tachikawa returns for this 1-cour adaptation and things are looking great for him.  Starting out as an artist for BLEACH episodes this guy moved up to episode directing with some really awesome episodes of some fantastic series since 2012:  Fujiko Mine, Shingeki no Kyojin, Kill la Kill, and last year’s first episode of Zankyou no Terror!  However, his directorial debut in the general chair was with the amazing mixed-media project about time travelers:  Arata-naru Sekai!  I expect to see some fantastic works in the future from Tachikawa and hopefully Death Parade will be a strong series in his directorial works for 2015!

A newly-wedded couple, Takashi and Machiko travel down an elevator and arrive at the same place– the Queen Decim bar.  This determines what humanity they have left after they’ve died and what it takes to be honest to one another.  In a way this is very much like Mushishi in how it handles the human relationships in this.  Revealing little by little as the minutes move on by.  These flashbacks reveal a lot about the couple:  Takashi being unable to trust his wife, Machiko being pregnant are just small pieces of this plot that gradually get worse for them as they continue playing the game.  This gently touches on the humanity side that Death Parade will [hopefully] represent each week.  Being creative here was the jump start it needed for an intriguing story:  a dart board that affects the player’s own body is a strong setup for a love-stricken story.  Machiko being ten weeks pregnant was a strong indication of this distrust between the two of them as well.

Takashi, beaten up by the conversations he overheard from her friends bears puts weight on his heart as each dart that is thrown pierces any shred of what he feels for Machiko apart.  The threads are slowly breaking here and Machiko is unraveling as well!  I especially enjoyed Machiko’s last dart targeting Takashi’s heart as this illustrates and foreshadows that she has been cheating on him and the baby isn’t even his.

I’ve watched this episode at least 5 times now and a big scene at the end caught on with me around viewing it the 3rd time around.  A possible theory perhaps that makes this series even more engrossing than it ever has before! Machiko lying to her husband in order for him to have an out as she wants to save him from bearing even more pain of killing his own child inside her.  WOW.  No wonder Decim was surprised by her act right there.  Amazing episode.

However, one part I did not like was how overly-exaggerated Takashi was after learning the truth about the baby and their marriage.  It was too forced considering the creators took the time with their development throughout the episode.  The beginning they act innocent and then gradually bend towards hating each other to the point of insanity.

The after-credits scene DOES have me a bit worried in how the creators are going to handle the formula week to week.  At first I thought they were going to establish a new story each week but after the sequence at the end I am not so sure.  Episodic or a concurring story?  Hopefully this will focus more on the death games themselves rather than the bar’s employees that are seen in the opening.

BEST OPENING OF THE ENTIRE SEASON!  MADHOUSE did an amazing job at animating all the characters movements here! A series that captures death in a realistic way and here we’ve got the staff of Quindecim singing and dancing?  As misleading as this is it works because we get a good view of what they do outside of handling the death of humans.  The animation matched up incredibly well with Bradio’s groovy song.  I’ve never heard of these guys before and they sound fantastic, can’t wait to hear the rest of their music!

I noticed this band with Barakamon’s ending song last year and they handled that extremely well.  While we may have had a similar style with this song it just so happens that it suits the story really well:  the hopelessness of people that have realized they’ve died and are holding onto the only good parts of their lives they cherish.  Also gives the viewer a larger look at what kind of life Takashi and Machiko lead with the additional runtime going into the credits.  Great placement for this.  Another awesome ending for the Winter 2015 Season!