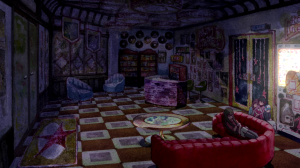 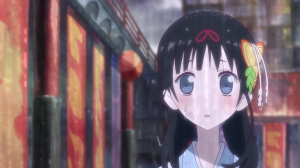 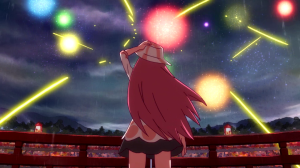 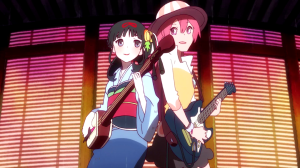 The hair on the members of Momiage Hammers look ridiculous but crazy fun.  Small details is what transcends Rollings Girls from a true adventure series to a wacky one with a simple plot about girls growing up as they travel together.  It’s also this very element that defines the typical moe tropes so well–  tsundere and dojikko are a showcase this episode breaking the mold by taking what we know about Bests to create different talents in these minor characters!

Week after week the background art continues to amaze me– it’s no surprise how smooth the fireworks scene and the fight scenes are here since they’re from Masafumi Yokota, key animator on Miyazaki’s film The Wind Rises.  Everything is drawn up nicely and I like that scene a lot towards the end–  Chiyo’s shimasen playing is animated here in high detail!

It’s this straightforward plot that catapults out of control with each district these girls involve themselves in.  Just like the journey with Thunder Road and her moonlight stone this arc uses a geisha breaking free of a respectable tradition out of family [as we see with her mother’s dissatisfaction] to form a friendship with rocker Misa.  It makes me think how much this correlates to the overall bond that Nozomi, Ai, Yukina and Chiaya share.  This might be my favorite episode so far because it pushes together so many crazy ideas–  Momiage Hammers music, geisha and rocker with Best abilities!

All while this is going on the story doesn’t forget where its focus is–  the moonlight stones and the reason behind why these four girls are traveling.  Kuranosuke represents the cryptic follow-through Nozomi and the others have as to why they are getting these stones.  Moreover it’s nice to see he’s not just a spy but a really good fighter whose got his suspicions on the stones and that the Takumi are becoming more and more involved:  delivering dangerous packages that can hurt people.  It’s all this build-up that has such strong intentions on concluding a few things here:  Chiyo and Misa’s very comical tsun-tsun relationship expanding outwardly through music and Shuten’s acceptance of the district’s own set of rules.  The fireworks are a good touch to establish a ‘coming together’ effect between the district’s people and the bigger picture:  that this is a beautiful series that packs quite a punch that could not have been done justly if it weren’t for all the build-up in these past two episodes.

In the previous episode we see Ai mentioning at the hot springs how much she wants a stone and given what she’s delivering here–  being questionable about Chiaya’s memory pad I am curious as to whether or not Nozomi will be using a moonlight stone to save her from succumbing to power.  Will there be a rift between these two at some point?  I wish this show would receive another cour because I’ve got a feeling their return home might be written in abruptly.