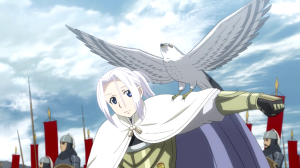 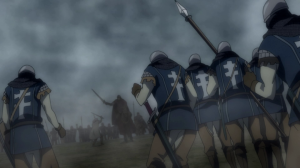 Would like to let my readers know that I will be hosting a full Space Dandy 26 episode series marathon at a theater.  I’ve secured official dates and they are eager about me hosting monthly.  I pick the series or film and host an event on it with raffle prizes.  I’m thinking of doing the first season of Psycho-Pass for October and the first season of Mushishi for November!

Very detailed animation–  especially the fire sequence!  It’s great that we are getting to see Arslan’s maiden battle right at the beginning here because this series is going to be needing every episode it can get in order to build his journey up in reclaiming the loss he experiences here.  For the sake of his father King Andragoras III being so stubborn and for himself in growing up and not being so blinded by an everything is peaceful notion just because he’s lived inside the palace walls all his life.  What the manga author Hiromu Arakawa did so well with the manga and the pacing here:  it’s not jumping ahead and forcing the heroic character Daryun until it was absolutely necessary here.  He’s got a hunch that something is off about the Lusitanian army setting a trap for them and this show doesn’t brush off the fact that just because your on the same side doesn’t mean you agree on everything that distract the overall narrative.

There big take away theme in this episode is “sin” and this episode focuses on this with Pars suffering a great defeat resulting in a ton of casualties.  The Lusitanians are considering savages from the Pars perspective because if no one believes in their religion then they should be punished.  From the Lusitanian’s point of view it’s that the Pars army are viewed barbaric because they hold a long-standing traditional throughout their land–  slavery.  The human race waging war against each other because of ideals–  doesn’t this sound like another series that has aired recently?  Aldnoah.Zero.  Arslannknows how to get it right because it focuses on the greater outcome of both sides rather than individual emotional experiences of its main cast.  It really helps when the series writer works on the eipsode in more detail–  Makoto Uezu wrote the wonderfully paced Katanagatari so I am certain this series will be flowing smoothly as it goes on.  I am curious though about how he is going to handle the complexity of Edogawa Ranpo’s collected works in the Summer Noitamina anime Rampo Kitan.

The first episode pointed out a pretty large possibility that the King isn’t Arslan’s real father–  I can see the similarities between his mother just not his father.  This strongly suggests the idea that perhaps Arslan was adopted by the Royal Family.  I think what nails this on the head with this episode is Kharlan’s betrayal–  he’s .  He’s been forthcoming about the coming attack and him going off to scout ahead is quite a huge foreshadow of the later events in this episode!  The sound effects in this are incredible–  the scene where the horses fall off the cliff,  Kharlan’s sword fight against Arslan and the very end where Daryun arrives to rescue him!  I just hope that with how detailed the animation was this episode they don’t run the budget dry before the first half finishes up!