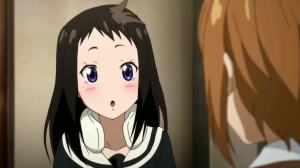 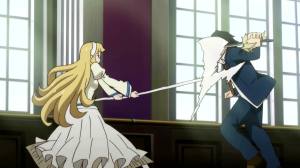 As a reader of the manga and having watched the original anime series, this spin-off was a delight to see. The scenes from Maka and Black Star were cool to see. Considering how the manga art looks, I knew the animation for this series would be different, but I’m not sure if I like it just yet. This episode felt very moe and bright. Not forced through the actions, but through the style it had on the characters. The OP is catchy! The ED is dull and I felt it didn’t fit the overall tone of this series. The fight towards the end was animated so well! It reminded me of Maka’s fight with Jack the Ripper! Such fluid animation there! This episode was a lot more light-hearted than the original series. Great fun for the new students and their interactions played off each other pretty well for this spin-off series. Tsugumi and Meme had the best chemistry in this episode, hope to see some more funny scenes from them. Seeing Sid was awesome! Too bad he wasn’t a zombie. I just hope this show doesn’t lose the creative drive that Soul Eater had. Falling into a trap of moe can be dangerous; a series such as this where the original maintained a steady pace for at least the first 26 episodes. Good thing there is enough material from the spin-off manga to animate this into at least 13 episodes. Might be a problem if it runs for a full cour. If it weren’t for the cameos from a lot of the main Soul Eater characters I may not have decided to review this series. Let’s see how the next episode turns out.