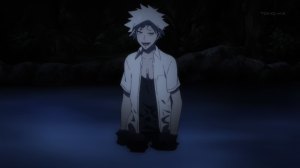 This was an ok episode. The dialogue felt a bit forced but the plot was intriguing enough to push the episode along. A training experiment to test synchronization with the team. Here was where we finally got a better look at how Heito is. This guy is crazy. He killed his parents as well as a ton of other people yet here he torments the other crew members on an island just for fun. The premise here was for all the members’ training. We get quite a bit of these kinds of episodes in adventure series, but for a robot series to have one crafted so subtly like this is rare. this series isn’t just a robot/mech series its turning into a horror series even stronger than before. Thanks to Heito’s character, and the secrecy behind the Reaper and Lightless Realm. Akashi is interested in Sasame, for that much we can tell by their conversations in this episode. That’s where I can see how this test can benefit. Synchronization pairing.

The scientists in this show mentioned pairing a couple of times and I clearly can see how this would work with those robots. I mean, we’ve got the Admonitions that possess feelings on an emotional level of people that died, why not have your team be able to read each other’s thoughts in order to push away the persuasion of the Admonitions. Smart to place this futuristic idea here. One thing I noticed towards the later half was how they synchronized and the kid versions of themselves were being followed by their adult counterparts. They could have handled that scene a lot better without all the melodrama.

However, this episode did have the best animation in the series so far. Those character designs are fantastic for this show! Must be because the island provided such a colorful backdrop for the cast to work with. There were still quite a few toned down segments in this episode. Yet, many of the scenes we’ve had in the past episodes were dark, and not so detailed, but here we finally got to see a bright blue ocean, green grass and the fire they built was a nice touch. All of this was pleasant to watch, aside from it’s plot being so dark. Great shift from the previous episodes. Also, Heito and Emiru? A pair? Did not see that coming at all. This show continues to surprise me in such small ways.