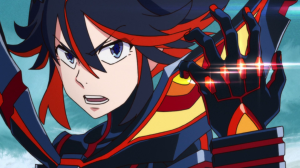 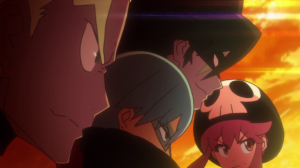 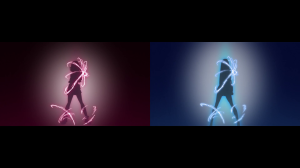 I can never get tired of watching those transformation scenes- Trigger did phenomenal work at animating those sequences!

Neglected to mention last time how great it was to see Ryuko rip Junketsu off herself as blood was flying off of her.  Just reaffirms the idea that the clothing in this show act like humans. Finally!  We get to see Iori’s form Regalia!  Do want to point out how this episode switched themes here- we went from a few episodes of an adrenaline rush of action even for more than the first half of this episode to a calm before the storm.  Nice to see this switch up. It’s interesting to see how this show had started out from high-society controlling the masses based on clothing into the transformation of human determination and finding their own strength at solving problems.  This episode completely ripped apart every notion that clothing is absolute power.

As much as I like Ryuko considering how she finally got her scissor blade complete- Nui stole the show here.  She’s even more crazy than previously seen- her arms get cut off, there is tons of blood and she’s freaking out so much!  That scene where she kept saying she was pissed was very frightening- just goes to show how far the villains in Kill la Kill will go to achieve their objectives.  Mako transformed into her Goku Uniform again! Awesome!