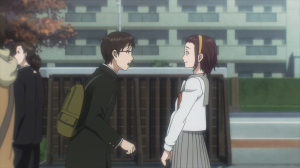 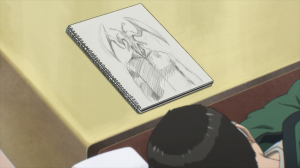 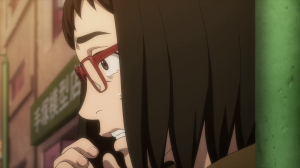 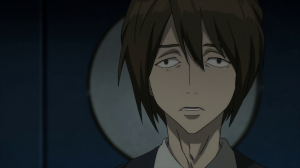 Kenji Kawamura, I was extremely surprised to see his name for this, because he helped episode direct some terrible productions–  Iron Man OVA [the initial anime series was bad enough], SoniAni: Super Sonico the Animation that utilized a mascot as a highly commercialized moe character centralized in the world of gravure.  Then there was Devil May Cry, they just had to make an anime series based off the video game franchise and it left tons of loopholes and poorly developed characters into the mix!

However, two shows that do stand out from his repertoire as actually decent are Tenjho Tenge, an energetic anime that sets its focus on a martial arts school and the popular mafia action series Black Lagoon.  Suffice to say this episode of Kiseijū is the best production he has ever directed in his entire career–  it helps a lot when you have highly-regarded source material to work with and this ultimately paid off quite a bit in his favor!

Alright, I’m sold, this show is the best this season has to offer and I cannot wait to see what the Blu-rays offer for this.  This will be the show I purchase on Blu-ray once they are released as I’ve been incredibly amazed at how well the direction has been every week!  Not to mention the amazing soundtrack that releases on the 24th of this month!

Yuuko has been caught in the middle of something huge here–  Shimada is very much a parasite and he will kill anyone who discovers his secret.  She’s along the background for a lot of the episode from the rest of the cast but it isn’t until she sees the baseball fly towards Shimada a land a hole in his head, reshaping himself that she KNOWS without a doubt that there is something fake about his face.

It’s about time people are starting to take notice of these alien beings and try to understand what they are doing on the planet–  the investigation team that spoke with Shinichi’s father cast aside any doubt HE had that his wife’s death was truthfully from a monster out of the world and not just some delusion he made up.  Fantastic way to amplify the situation that ordinary humans are being put into terrible situations by using an investigator’s drawing of a human host and Yuuko’s illustration of Shimada to get this show moving at a highly accelerated rate!

Everything up to this point from Shinichi’s fight with A, his mother stabbing him in the heart and meeting Uda a human parasite similar to him that has let up to the inevitable–  humans were going to find out about the mincemeat murders from the very beginning and pick up the traces that aliens have invaded humankind.

Even Mitsuo’s fear of Shinichi’s transformation in behavior proves that parasites can enhance human understanding–  especially when Shinichi was able to pick out their leader Yano after never having met him before!  The tone this episode conveyed was a lot different than the previous one in that there were a lot of surprising interactions with the cast here.

Shimada shocked at the fact that he couldn’t detect Migi and yet Shinichi was still able to jump that wall, Yano’s fear being dismantled by Shinichi’s sheer strength in his fist, Yuuko seeing Shimada actually shape-shift and Murano’s disheartened truth that Shinichi really has evolved from the young man she cared for.  Loved how the writers pulled in that past sequence between Shinichi and Murano’s first meeting–  this really illustrates the fact how far she will go for him.

I also like how the composer Ken Arai mixed up the music this time around with a few pieces with less of a dubstep feel to it.  It definitely provided a stronger collection of scenes with Yuuko’s innocent obsessional feelings about Shimada to quickly advance towards a life and death cliffhanger event that results in the horrified expression on her face by the end! Can’t wait for the next episode!