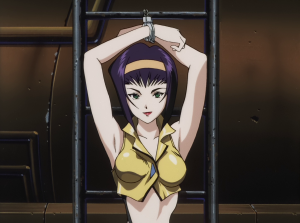 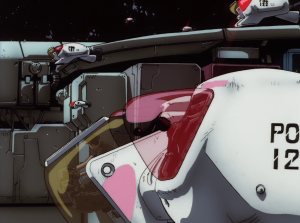 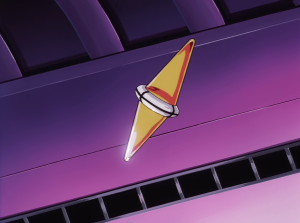 Real quickly I want to invite my readers to my Facebook page for this site, it’s finally up here.

The first episode introduced us to bounty hunters Spike and Jet–  the lives they lead and the struggles they have at making money with their professions.  While it was a very delicate look into the universe of Bebop the second entry shifted with a less serious tone using Ein as the bounty reward and the hilarity of Spike’s own skills as a fighter to add more a drive to this series.  Honky Tonk Woman delivered one of two of the strongest female characters in the entire series with Faye Valentine and her self-indulgent endeavors at escaping from a life that was boring to her.  That was only touched on here and now we’ve got a varied main cast on board the Bebop and this is where the fourth episode comes in.

Faye decides to work with Spike the rest of the Bebop crew to hunt down a space activist group that plans to turn the human population of Ganymede into monkeys.  The silliness of this episode seeped through with the virus “Monkey Business” but more so with the depiction of Harrison and his relationship with his mother, Twinkle Maria Murdock.  I really enjoyed how this completely backfires on him by the end with his insistent punishments for neglecting his duties as a member of the terrorist group Space Warriors.

This also marks the first time we are given a look into Jet’s past and his connection with the ISSP.  Bob’s reveal to Jet about the Space Warriors bounty cancelled and demanding a ransom with the hostages was proof that there is a lot more to him than the bounty hunter that he claims to be.  Faye was used wonderfully here, because since the previous episode we were given a comedic side to Bebop that we hadn’t seen before–  sarcasm and this plot emphasized it so much more.  Her constant bickering with Spike including Ein really pushed towards the development in how real these characters were for a series set in space and their actions to keep these adventures highly engaging.

It is also great how well directed this episode was because we’ve got Yoshiyuki Takei handling this–  whom got his start out on the popular Escaflowne series of the early 90’s and the more recent and very inventive ending animation to Space Dandy‘s final episode!

If only they surprised the audience here with all 26 episodes as I definitely would have stayed for every single one of them.  However, it is great that they chose these four episodes to screen because while they were a good start for a first-time viewer they rekindled what fans loved about the series.  Each one of them had been unique, they offered a great perspective into the world of Bebop without spoiling parts of the main story.  It’s memorable cast and it’s enthralling collection of stories helped landmark this series to greatness.  Just in the way that Watanabe’s newest series Space Dandy had done this year.  While Space Dandy may have been a spiritual successor or rather answer to Bebop‘s main themes, Cowboy Bebop is a definitive call to establishing Japanese animation into the mainstream industry of television–  it’s wildly ambitious, genuinely dramatic and funny at times utilizing episodic content at the forefront.  It is an honest view of western culture with a mix between American and Japanese commentary in a very stylish way.

I sure do hope that the Alamo Drafthouse and their collaboration with Funimation would considering screening the rest of this significant series as it would give a newer generation of anime fans a broader look at what made japanese animation so important at that time rather than the countless moe-filled series that have become the foundation of this medium today.  It is interesting though to see how much animation has changed since then and how often we are given the anime of today with a pretty look rather than a realistic and mature one.  I guess what I’m trying to say here is that what Cowboy Bebop taught anime series ahead of its time is to be solid, hearty and rich in all facets of storytelling.

Also, want to point out that I wonder if the disguise Morgan was using at the beginning was the culmination of Dandy, seriously the guy looks very similar to him.  Not to mention the star on his suit.  Really cool to see that thrown into an earlier series like this and it makes me think about how much influence this series had on developing Space Dandy—  the currency, Toys in the Attic fridge, Dandy’s ‘bang’ quote, among many others.